US Vice President to visit Dublin, Mayo and Louth before playing golf with Taoiseach 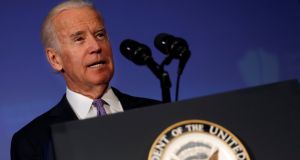 US Vice President Joe Biden will visit Co Dublin, Co Mayo and Co Louth, deliver speeches at Trinity College and Dublin Castle, and play a round of golf with the Taoiseach during his five-day trip to Ireland, according to the White House.

Mr Biden’s schedule was released by his office in Washington last night ahead of his arrival into Dublin Airport this evening on Air Force Two.

The White House said that Mr Biden and Mr Kenny will “be making stops in several towns in County Mayo and visiting points of significances to the Vice President and the Taoiseach.” He will stay overnight in Co Mayo.

The Vice President and the Taoiseach will play golf on Thursday morning, fulfilling a long-standing invitation from Mr Kenny to play a round together in his home county. Afterwards Mr Biden will return to Dublin.

On Friday, he will make a speech at Trinity College and tour the university’s library. Late that afternoon, he deliver the keynote address of his trip, speaking on “the Irish-American experience, the shared heritage of the two nations, and the values of tolerance, diversity and inclusiveness” at an event in Dublin Castle.

That evening he will deliver remarks at the 40th anniversary gala of the American Ireland Fund, the philanthropic organisation, in Trinity College.

On Saturday, Mr Biden will tour Newgrange Stone Age Passage Tomb in Co Meath before travelling on to Co Louth where he will tour the Kilwirra church and cemetery near the coastal village of Carlingford. He will return to Dublin that night.

On Sunday, the final day of his visit, Mr Biden will attend a lunch hosted by Mr Kenny at Farmleigh in the Phoenix Park, Dublin before he departs for Washington.

It will be an emotional visit for Mr Biden coming just over a year after his eldest son Beau, whom he had hoped to travel with to Ireland, died of cancer.

The Vice President is travelling with his brother, sister, children and his grandchildren.

He told The Irish Times in the days before his departure that his visit “means a great deal” given how the values of his Irish ancestors had “shaped my soul”.