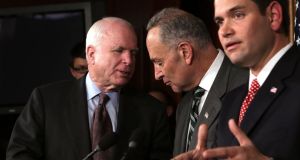 
Hundreds of thousands of illegal immigrants in the US could be excluded from becoming US citizens under proposals being worked on by a bipartisan group of senators, expected to be unveiled next week.

Details of the legislation drafted by the “Gang of Eight” senators, led by Democrat Chuck Schumer and Republican John McCain, have emerged in an Associated Press report showing that the proposals may bar anyone who arrived after December 31st, 2011, from applying for legal status and eventual citizenship.

This could affect thousands of Irish immigrants who have left for the US in the past 15 months fleeing high unemployment and the economic crisis.

Numbers rise sharply
The numbers moving to the US have increased sharply during the crisis. Some 8,600 people emigrated in the 12 months to April 2012, compared with 4,700 in the corresponding period the previous year, according to official figures.

After months of negotiations, the senators are expected to unveil the first comprehensive immigration reform bill in more than a quarter of a century on Tuesday. It is expected to provide a 13-year path to citizenship for people living in the US illegally who qualify.

This will only be available to the “undocumented” once a new security plan for the border with Mexico is in place, employers have adopted mandatory electronic verification of a worker’s legal status and a new electronic system to monitor the entry and exit of temporary visa holders is in place at air and sea ports.

The Senate judiciary committee, which will consider the proposed legislation, has scheduled a hearing for next Wednesday and is expected to amend and vote on the Bill next month before it goes to the Senate.

Republicans have insisted on more stringent legal enforcement and border security in return for their support for a path to citizenship for the estimated 11 million illegal immigrants in the US.

Irish immigrants arrested
In a sign of the pressure on the undocumented, a report on the arrests of two illegal Irish immigrants living in the Boston area sparked fears in the Irish-American community that immigration enforcement officers were investigating the use of false visa stamps by undocumented Irish to secure US driving licences.

The two individuals, one of whom has been living in the US for 12 years, were, however, targeted based on criminal convictions for driving under the influence and not for using fraudulent documentation.

A spokesman for US Immigration and Customs Enforcement said the arrests were part of enforcement action targeting “at-large criminal aliens and others who pose threats to the community.”