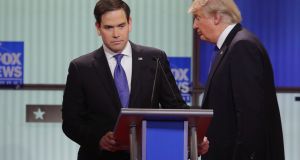 There’s an episode in the latest series of the Netflix political drama House of Cards where fictional president Frank Underwood attempts to manipulate party delegates at the Democratic National Convention in an audacious attempt to have his wife Claire nominated as his vice-president.

The escalating fight to stop Donald Trump winning the right to be the Republican nominee in November’s presidential election appears to be a case of life imitating art, though even the writers of the drama series would likely consider the public taunts about penis size and the attractiveness of the candidates’ wives in Trump’s unconventional campaign too outrageous for one of their plotlines.

In an unusual move, the 44-year-old has written to party leaders in the 21 states and territories where he won delegates, saying that he wants to retain them, even though he is no longer in the running to be the party’s candidate in the November 8th poll.

The senator wrote to the chairman of the Alaska Republican Party asking that the five delegates he secured in that state “remain bound to vote for me” at the Republican National Convention in Cleveland in July.

He won 172 delegates in all and just one state, Minnesota, along with the District of Columbia and Puerto Rico. This compares with Trump’s 19 state wins out of 30 contests and delegate haul of 735. (Cruz is second with 461 delegates and Ohio governor John Kasich has 143.) Trump needs to win 1,237 delegates to secure the nomination but is looking like he might come up short, which would turn the Republican race into something of a free-for-all at the national convention.

Rubio, one of Trump’s sharpest critics, could use his pledged delegates to help Trump secure the nomination or block him at what is likely to be a contested convention.

Normally, candidates release their delegates once they drop out but Rubio is trying to skirt the rules to maintain control of his delegates on the basis that his campaign has been “suspended”, not ended.

The Republican nominating process is complicated by the fact that states operate their own rules and the allocation of delegates is decided by each state party, not the Republican National Committee.

For example, in the only state where Rubio was victorious – Minnesota – the 17 delegates he won will travel to the convention free to vote for whomever they wish. Alaska Republican Party chairman Peter Goldberg had reallocated Rubio’s delegates proportionately to Trump and Cruz but decided, after receiving Rubio’s letter, that his delegates should remain bound to the Floridian since he had only “suspended” his campaign.

If Rubio succeeds across all 21 states and territories where he has delegates, he could deny Trump his 172 delegates and reduce the pool of floating delegates that the businessman could win over, blocking him from winning the nomination at least on the first ballot at the convention.

“It is my desire at this time that the delegates allocated to me by your rules remain bound to vote for me on at least the first nominating ballot at the national convention,” Rubio wrote in the letter.

The increasing hostility between Trump and Cruz over a dispute about their wives’ appearances has led both men to back away from a pledge sworn by each candidate during the first Republican presidential debate in August that they would support the ultimate nominee.

“No, I don’t anymore,” said the billionaire tycoon when asked at a town hall meeting broadcast by CNN on Tuesday night whether he would respect the “loyalty pledge” that all of the candidates agreed to.

“I’m not in the habit of supporting someone who attacks my wife and attacks my family,” Cruz said when asked at the event in Wisconsin.

Trump retweeted a photo posted last week by a supporter to his followers mocking the appearance of Heidi Cruz compared with Trump’s retired model wife, Melania.

The businessman was reacting to a photograph posted by an anti-Trump super political action group, or super Pac, showing his wife posing nude for a magazine photo shoot. He claimed that Cruz was behind the release of the photo.

“I didn’t start it,” Trump said when asked by CNN moderator Anderson Cooper about retweeting the photo of Heidi Cruz. “Sir, with all due respect, that’s the argument of a five-year-old,” Cooper replied.

Given the growing anti-Trump feeling and backroom machinations to stop him, the convention could turn into a schoolyard brawl.