Ex-US president sells his wife’s message in New Hampshire, where Sanders is soaring

"I just kept kind of ogling her" says Bill Clinton, who says Hillary introduced herself to him while the pair were staring at each other in law school. Video: Reuters 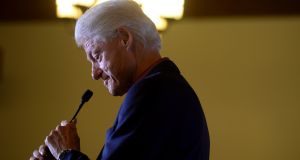 The room erupts in applause and illuminated phones are raised to snap the moment the 42nd president passed through their town.

In his second week of solo appearances canvassing for his wife’s second presidential bid, the former president (69) swung through snowy western New Hampshire, where voters lean towards Hillary Clinton’s closest rival, Bernie Sanders, the US senator from across the Connecticut river in neighbouring Vermont.

His visit to the towns of Keene, Claremont and Hanover comes as her battle with Sanders for the Democratic nomination is intensifying.

Polls show the socialist senator extending his lead in New Hampshire, which votes in a primary on February 9th, and Clinton slipping in Iowa, the first state to vote in the February 1st caucuses.

On his one-day tour through the Granite State, Bill Clinton returned to his tried-and-tested “it’s the economy, stupid” theme to promote his wife’s campaign that was so successful in his own 23 years ago.

In 45-minute and 50-minute speeches – before about 200 people in Claremont and 700 in Hanover respectively – he praised her accomplishments, from when she was first lady of Arkansas through to his time in the White House, her tenure as a senator for New York and later as Barack Obama’s first secretary of state.

Even Northern Ireland received honourable mention. Bill recalled his wife’s crucial intervention when peace was “on the rocks in 2010”.

At the request of the then Northern Irish secretary of state, Hillary made some calls and “everybody was friends again.”

“She is the only person in the world who have could have done it,” he recalled the former British politician telling him last year.

The former president is no longer the force of retail politics he once was.

His raspy southern drawl is even more of a whisper now, interrupted by coughs.

He stumbles occasionally over stock campaign-trail phrases, yet he can still hold a crowd and has the ability to distil complex policy into common language.

He spends much time talking about how to counter the opiate and prescription drug epidemic that is hurting states like New Hampshire.

“She is the best candidate to give us the kind of social policies that will put us together again,” he said to applause in Claremont.

The Connecticut river valley is strongly working-class and Sanders is faring better with a constituent group with whom the Clintons have traditionally found favour: blue-collar Democrats.

This is an area where voters can swing the vote in the state’s primary.

“Once you get outside of registered partisan Democrats, she is in a serious amount of trouble and Sanders does very well among those voters who are unaffiliated,” says Dante Scala, a politics professor at the University of New Hampshire.

Bill Clinton’s second-place finish in the New Hampshire primary in 1992 helped propel him to the White House, while Hillary won here in 2008, despite her third place in the Iowa caucuses well behind Obama.

“New Hampshire has been good to my family,” Clinton told his audience in Hanover.

Still, that was years ago and the Clinton camp is having to work hard to recover ground from Sanders, whose populist message attacking Wall Street and income inequality is winning him new fans.

This is the reason why Bill has been dispatched here. He has a profile of a Donald Trump and can get voters out.

Sanders is also why one Hillary prominent ad in New Hampshire focuses on the wage gap.

In Claremont, Bill Clinton stressed her track record as a doer, but he did not attack her rivals by name, avoiding his missteps during her 2008 campaign when his frustration at his wife’s stalling campaign boiled over into remarks that Obama took advantage of.

However, on Tuesday Chelsea Clinton had no such reservations: she criticised Sanders’s single-payer healthcare plan accusing him of wanting to “dismantle Obamacare” – the president’s flagship healthcare programme.

“Politics in a campaign can be just about rhetoric. Governing is whether you deliver or not,” he told supporters in Claremont.

He referred to his wife’s ability to work with Republicans and to stand up to them when needed, citing her 11-hour appearance at a congressional panel in October examining the 2012 attack on the US outpost in Benghazi, Libya.

That was a high point for her and the reference draws loud applause.

Some supporters remain undecided with just 25 days to go to the primary.

In Claremont, Michael Kern, a student born five years after Bill Clinton became president, prefers Sanders’s consistency and the fact he has been pushing the same progressive agenda for 40 years.

“A lot of people are afraid to go to college and a lot of that fear is from the insane cost because people wind up in tens of thousands of dollars in debt,” he said. “He wants to help out with that.”

At Dartmouth, another student, Lucy Tantum (18), said she believed Clinton’s goals were “tangible” whereas Sanders was “very idealistic”.

“She is someone who can actually get things done, whereas Bernie Sanders has a lot of talk but not a lot of action to prove it,” she said.

She is concerned about Bernie’s plan to rewind Obama’s healthcare law and introduce universal healthcare through the states.

“To me that is a scary proposition because it took a long time to get where we are now. What we have needs tweaking. I don’t believe we should throw it all away,” she said.

For some among the older crowd in Claremont, it is Clinton’s experience and prospects against a Republican that sways them.

“I just don’t think he’s electable. We could be wrong. Obama was a pretty long shot at one point, too.”