Former US First Lady and Secretary of State Hillary Clinton announces her presidential candidacy for the upcoming 2016 election. Video: Reuters 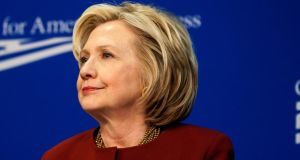 Hillary Clinton: I’m getting ready to do something too . . . I’m running for president. Photograph: Pete Marovich/Bloomberg

Hillary Rodham Clinton on Sunday officially launched another attempt to become the first female president, ending years of speculation and firing the starting gun on the 2016 presidential race.

The former secretary of state, senator and first lady declared her candidacy in a slickly produced video that was starkly different to her 2007 campaign announcement, focusing on the kind of voters she hopes to win over at the ballot in 574 days’ time rather than on herself.

“I’m getting ready to do something too,” says Mrs Clinton, standing before a house with a garden behind her. “I’m running for president.”

In the smartly made video running to just over two minutes, Mrs Clinton attempted to connect with the American people and focused on economic inequality, a topic of national debate in the US public life and likely to be a major campaign issue for all candidates in the 2016 race.

“Americans have fought their way back from tough economic times, but the deck is still stacked in favour of those at the top,” she says.

I'm running for president. Everyday Americans need a champion, and I want to be that champion. –H https://t.co/w8Hoe1pbtC

“Everyday Americans need a champion and I want to be that champion, so you can do more than just get by, you can get ahead and stay ahead because when families are strong, America is strong.”

Kickstarting a campaign focusing at first on low-key events aimed at connecting with voters in the critical early-voting state of Iowa, Mrs Clinton says: “So I’m hitting the road to earn your vote because it is your time and I hope you’ll join me on this journey.”

She followed up her announcement saying she was “headed to Iowa.” Her first major campaign speech is not expected until next month.

She is the third major candidate to declare her 2016 candidacy, following announcements by Republican senators Ted Cruz of Texas and Rand Paul of Kentucky, but the first on the Democratic side.

Support too came from President Barack Obama, who beat her for the Democratic nomination in 2008. She “would be an excellent president,” he said on Saturday, with “some strong messages to deliver.”

Illustrating the strength of Clinton’s candidacy, a host of expected and declared Republican contenders and one Democrat fired salvos at the 67-year-old politician even before she said she was running.

Former Florida governor Jeb Bush, one of the leading likely Republican candidates said in a video released at the weekend the country “must do better than the Obama-Clinton foreign policy” and “better than their failed, big-government policies.”

In an interview with a Sunday talk show, Mr Paul lambasted her for using a private email address for official business as secretary of state and for her family’s charitable foundation taking foreign donations.

“I do think that there is sort of a history of the Clintons sort of feeling like they’re above the law,” he told CNN.