Taoiseach hopes move will strengthen ties with the United States 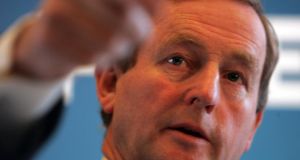 Taoiseach Enda Kenny has said the Government and state officials in Rhode Island are exploring the possibility of a direct flight between Shannon and the state’s capital Providence, strengthening the ties between Ireland and the US.

Mr Kenny was speaking on a reciprocal visit to Rhode Island after hosting the state’s Democratic governor Lincoln Chafee on a trade mission to Ireland earlier this year. There were discussions under way between officials in Rhode Island and the authorities at Shannon Airport about starting a direct flight.

“Clearly, business people here would see that as being of great interest and great potential, as would the mid-west region,” the Taoiseach told reporters. Mr Kenny said that the IDA, Enterprise Ireland and other Irish business groups have visited Rhode Island since the governor’s visit.

Greeted by Mr Chafee as he arrived in Providence on the train from New York City where he attended the United Nations climate change summit, the Taoiseach spoke to an audience at the Rhode Island State House that included the state’s US senators Jack Reed and Sheldon Whitehouse.

“I see enormous opportunity both ways here and this is the start of a process of engagement of deeper links between the United States and Rhode Island,” he told the audience that included state representatives, prominent Irish and American businesspeople and members of the Irish-American community.

Senator Reed told The Irish Times that Shannon and Providence had something to offer each other and that the state was “working awfully hard” to establish the direct air connection with Ireland. Air cargo could be moved quickly through Rhode Island onto the inter-state highway system in the American North East and there were plans to extend Providence airport by 2017 to accommodate the world’s biggest aircraft, he said.

Rhode Island, America’s smallest state, is an hour from Boston and three hours from New York City, two of the larger Irish-American cities, so Providence with its lower costs could offer a more affordable alternative route.

“This would be something that would encourage travel both ways because this is a great gateway to Ireland as well as a gateway to America,” he said. Governor Chafee told this newspaper that the establishment of a Shannon-Providence air route “would be huge for our area around the airport.”

Mr Kenny also visited the Rhode Island Irish Famine Memorial where in a speech he praised Governor Chafee for pardoning Irish immigrant John Gordon, who was wrongfully convicted of murder in 1845. Gordon was the last man to be executed in Rhode Island. He was pardoned 166 years after his death.