Georgetown college atones for past ties to slavery 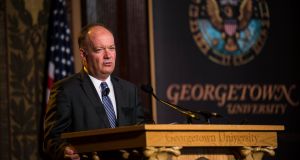 John DeGioia, president of Georgetown University, announces a series of steps to atone for institution’s sale of 272 slaves in 1838, at the school in Washington. Photograph: Gabriella Demczuk/the New York Times

Georgetown, the Jesuit university in Washington, has become the latest US third-level college to take steps to atone for the past: namely, its historical role in slavery and the money made on the back of the work and sale of black slaves.

The university’s president, John DeGioia, at an event on Thursday went further than other colleges such as Brown and Harvard have to recognise their links to the slave trade. It has said it will offer preferential admission to the descendants of slaves sold for its benefit.

The ties between American universities and the slave trade have been known for some time but the issue of race relations has become a hot topic on campuses recently as the Black Lives Matter movement has stirred debate on racial discrimination in policing, criminal justice and beyond.

“It is with deep gratitude and humility that I recognise your presence,” DeGioia told relatives of those slaves sold by the university who travelled to Georgetown to hear him acknowledge the college’s historical ties to slavery. It is a dark past that the university is publicly and actively embracing and a history that has a number of Irish connections.

For the first 40 years, from Georgetown’s foundation in 1789, the university was tuition-free and the Jesuits used money earned from their rural plantations, worked by black slaves, to fund the college. Georgetown in the early 19th century was a port city and played an active role in the slave trade. Struggling with crippling debts, two presidents of Georgetown, Fr Thomas Mulledy and Fr William McSherry, organised the sale of 272 slaves from a Jesuit tobacco plantation in Maryland to sugar and cotton plantations in the Deep South in 1838.

A new report by a panel of Georgetown staff, students and alumni that investigated the university’s involvement in slavery found that families of sold slaves were broken up and ended up in Louisiana “where they laboured under dreadful conditions”.

Some were sold on a number of times, including to Emily Sparks, the widow of a notorious slave trader Austin Woolfolk in 1859.

The university made $115,000 – about €3 million in today’s money – which was used to repay the college’s debts and fund Jesuit schools in New York and New England that educated the waves of Irish immigrants who came to the US in subsequent decades.

Georgetown said this week it was stripping the names of the priests from campus buildings over their role in the 1838 sale. Mulledy Hall will be renamed Isaac Hall after a 65-year-old slave whose name is the first listed in the 1838 “Articles of Agreement”.

McSherry Hall will be renamed Anne Marie Becraft, described in the university’s report as “a woman of colour, a trailblazing educator, a person with deep family roots in the neighbourhood of Georgetown and a Catholic religious sister in the 19th century”.

Both Mulledy and McSherry were born to Irish immigrants. McSherry’s father, Richard, ran a plantation near Charlestown in West Virginia and made his fortune trading goods between Jamaica and Baltimore that brought him into close contact with the slave trade.

“The father’s status matters but what’s most important is our recognition of the centrality of slavery to the American economy,” said Massachusetts Institute of Technology history professor Craig Steven Wilder, author of the 2013 book Ebony and Ivy: Race, Slavery and the Troubled History of America’s Universities.

“[It] explains the father’s career, the son’s choices and Georgetown’s evolution.”

In the decades prior to the sale, Irish clergy visiting the Jesuits’ Maryland plantation were horrified by the conditions they found.

Co Meath missionary Fr Patrick Smyth, who spent several months in Maryland in the late 1780s, published a treatise on his return to Ireland documenting the clergy’s reliance on slavery.

He accused the church of abusing enslaved people to support wasteful spending. In 1820, another Irish priest, Peter Kenney, reported back that the Maryland masters fed the slaves insufficient rations, overworked them and inflicted excessive violence on them.

Fr Kenney “especially condemned the practices of whipping pregnant women and beating women ‘in the priests own parlour, which is very indecorous’,” according to Wilder’s recent essay, War and Priests: Catholic Colleges and Slavery in the Age of Revolution.

Wilder told The Irish Times the most significant aspect of American universities addressing their historical association with the slave trade is that it will “help to shape and inform the broader national discussions on racial justice and, even, reparations”.

“That’s a conversation that the United States needs to have. It needs an honest confrontation with its history of slavery in all its totality and with all its ugliness,” he said.