Further blow to NFL as player charged with aggravated assault 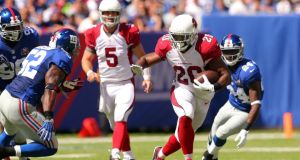 The National Football League’s woes continue to mount after another professional American footballer was arrested on domestic violence charges, adding to the growing public outrage over the league’s handling of assaults by players.

Mr Dwyer was released from Fourth Avenue Jail in downtown Phoenix yesterday into a throng of reporters after posting a $25,000 (€19,000) cash-only bond.

The Phoenix police department says that the alleged victims were a 27-year-old woman and an 18-month-old child - identified as his wife, Kayla Tobin Dwyer and son, Jonathan jnr – and that the incidents occurred over two consecutive days in July.

He has also been charged with two counts of criminal damage and one count of preventing the use of a phone in an emergency. The player admitted to the incidents but denied any physical assaults, police said.

Mr Dwyer’s team said that they only became aware of the incidents on Wednesday and have dropped the player from all team activities. The NFL has said it will review the allegations under its personal conduct policy.

The arrest and charging of the player piles further pressure on the NFL after star players Ray Rice of the Baltimore Ravens and Adrian Peterson of the Minnesota Vikings were dropped by their teams over, respectively, domestic violence and child abuse allegations. The Vikings, reversing an earlier decision, have decided not to continue fielding Mr Peterson as he faces child abuse charges.

The Carolina Panthers have put their player Greg Hardy on voluntary leave with full pay to fight a new trial this autumn as he seeks to overturn a domestic violence conviction handed down in July.

In contrast, the San Francisco 49ers are allowing defensive player Ray McDonald to continue playing, even though he was arrested over an alleged domestic violence incident that occurred at his house after his 30th birthday party. He has not yet been charged, however.

Democratic congresswoman Jackie Speier blasted the league’s lenient handling of off-field player violence, telling the House of Representatives this week that the 57 players arrested for domestic violence since Mr Goodell became commissioner in 2006 had been punished with just 13 games of suspension.

“The NFL would rather see these players on the field than take a stance against violence. After all, anything for football. I say, bench them,” she said, adding to calls for Mr Goodell to resign over the league’s response.