Amateur video captures the gunfire exchange between a man and police in Ferguson, Missouri, which left the man gravely wounded. Video: Reuters 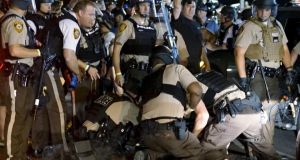 Police in riot gear contained roughly 200 protesters who had gathered in the streets of Ferguson, Missouri on Monday to mark the anniversary of the police shooting of Michael Brown. an

The demonstrators, some waving flags, beating drums, and shouting anti-police slogans, marched along a street that was a flashpoint of last year’s riots which erupted after white police officer Darren Wilson shot dead the 18-year-old unarmed black teen whose death ignited a national firestorm on race relations.

Nine people were arrested late on Monday after a group of protesters briefly blocked the roadway, though demonstrations late into the evening were largely peaceful.

Authorities had declared a state of emergency on Monday for the St Louis suburb and surrounding areas after police officers shot and critically wounded a man in an exchange of gunfire Sunday night, marring what had been a day of peaceful demonstrations.

Among the demonstrators on Monday evening was 51-year-old Ferguson resident Roberta Lynch, who said relations between the police and community had improved little over the past year.

“They are doing the same old stuff, taking our rights,” Lynch said. “They need to give us our space.”

Monday’s demonstrations capped a day of civil disobedience called by activists to protest the shooting of Mr Brown and other unarmed black men across the United States by police.

Clergy and civil rights groups led a series of protests, at one point staging a demonstration at a courthouse in St Louis where 60 people were arrested, including Princeton University professor and activist Cornel West, according to a protest organizer.

The death of Brown and a grand jury’s decision to spare the white officer from criminal charges led to a wave of demonstrations that boiled over into rioting and arson at times and spawned sympathy rallies across the country.

Brown’s death also prompted greater scrutiny of racial bias within the US criminal justice system, giving rise to the “Black Lives Matter” movement that gained momentum from other high-profile killings of unarmed minorities by white police in cities such as New York, Baltimore, Los Angeles, Cincinnati and most recently Arlington, Texas.

St Louis County Police Chief Jon Belmar, standing across the street from the demonstrators, told reporters that police officers were going to give protesters leeway to march, but said the authorities also had to maintain public safety.

“Last night was pretty out of control at times. Unfortunately, all the good work that’s happening on both sides of the street has been marred by violence.”

The violence, according to Belmar, erupted Sunday when two groups of agitators apparently began shooting at each other, disputing what had been peaceful demonstrations.

At one point a gunman darted across a parking lot and was confronted by four officers who pulled up in an unmarked vehicle.

In an exchange of gunfire the officers wounded the suspect, according to police.

Prosecutors charged the man, Tyrone Harris, who was in critical condition in a hospital, with four counts of assault on law enforcement, five counts of armed criminal action, and one count of shooting a firearm at a vehicle. His bond was set at $250,000.

Harris’s father said his son did not have a gun.

“He was running for his ... life because someone was shooting at him,” Tyrone Harris Sr said in a telephone interview from his St. Louis-area home.

The younger Harris was out on bail awaiting trial on charges of stealing a motor vehicle, theft of a firearm and resisting arrest. He was charged with those crimes on November 5th 2014 and released after posting a $30,000 bond on December 19th, records showed.

Activist groups, meanwhile, said the plain clothes officers who shot Harris should never have been deployed to the scene.

Missouri Governor Jay Nixon called Sunday’s violence “a sad turn of events” carried out by a criminal element and appealed for peaceful rallies on Monday. But Nixon, who had deployed the National Guard to quell violence last year, did not make any mention of additional security for those rallies.

Protester Rayna Martin, 17, who lives in the neighbourhood where Brown was shot, said the violence within her community has been made worse by the actions of police.

“They kill us, they get away with it. It’s crazy” she said.