St. Louis County Police release a video they say shows a suspect, accused of firing on police, drawing a pistol from his person during protests in strife-torn Ferguson, Missouri. Video: Reuters 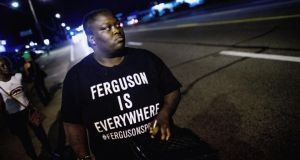 A demonstrator marking the one-year anniversary of the shooting of Michael Brown participates in a protest on West Florissant Avenue on on Tuesday night in Ferguson, Missouri. Photograph: Scott Olson/Getty Images 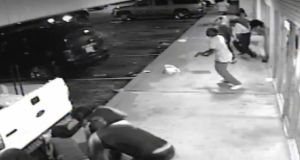 A Handout surveillance camera image released by Missouri police allegedly showing shooting suspect Tyrone Harris with a pistol in his hand during an exchange of gunfire with another individual or individuals in Ferguson. Photograph: St Louis County PD/EPA

Protests in Ferguson, Missouri, over last year’s police killing of an unarmed black teenager ended peacefully on Wednesday morning, law enforcement officials said, after shots had been fired and shop windows smashed earlier in the week.

It was the first night since Friday to end without arrests, said St Louis County police spokesman Shawn McGuire.

The mainly black St Louis suburb of 21,000 people has had months of largely peaceful protests punctuated by nights of rioting, arson and gunfire since a white police officer fatally shot 18-year-old Michael Brown on August 9th, 2014.

A crowd of several dozen protesters took to West Florissant Avenue, which has borne the brunt of the rioting, on Tuesday night.

Demonstrators occasionally attempted to block traffic and threw rocks at police, but the conflict was defused and no injuries to civilians or police were reported, county police said early Wednesday.

A state of emergency declared after Sunday night protests during which police shot and critically wounded an 18-year-old black teenager they said had fired at them, remained in place.

County executive Steve Stenger told local media on Tuesday, however, that it might be lifted if calm prevails.

Police on Tuesday released a video of Sunday’s shooting that they said showed the teenager, Tyrone Harris, drawing a pistol from his pants.

Mr Harris has been charged with four counts of assault on law enforcement, five counts of armed criminal action, and one count of shooting at a vehicle. Bond for Mr Harris, who is black, was set at $250,000 (€223,000).

Harris’s father has denied his son had a gun. Others in Ferguson have said he might not have realised that he was firing on plainclothes police officers.

Mr Brown’s death and similar police killings that followed in Baltimore, North Charleston in South Carolina, Cincinnati, and Arlington in Texas, sparked a year of protests and debate across the US about race, justice and law enforcement’s use of force.

A grand jury and the US Justice Department found Darren Wilson, the officer who shot Mr Brown, broke no laws in the shooting.

A separate Justice Department report found the police department in Ferguson routinely violated the rights of black citizens, who make up two-thirds of the city’s population.

Mr Wilson has since left the force. The officer who killed a 19-year-old black Texas college football player last week was fired on Tuesday.