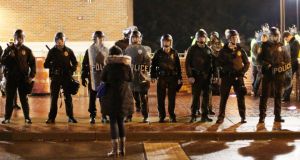 Police line up across from protesters outside the Ferguson Police Department in Ferguson, Missouri. Photograph: EPA

There is an uneasy quiet in Ferguson, Missouri ahead of a grand jury on whether to bring charges against a white police officer for fatally shooting a black teen.

With the St Louis suburb and the rest of the country waiting for an announcement, activists and police have been taking steps to avert more street violence.

The August 9th shooting triggered months of protests and a national debate over police violence. Officer Darren Wilson has said he fired on 18-year-old Michael Brown in self-defence, while Brown’s companion has said the teen had his hands raised and was trying to surrender.

On Saturday, the dead teenager’s father, Michael Brown, and some of the family’s supporters handed out Thanksgiving turkeys to residents in the street where his son was gunned down. Many were surprised when he knocked on their doors.

“I had to come and just give back to the people,” Brown told reporters. He wore a red T-shirt bearing a picture of his son’s face and the messages “Gone Too Soon” and “I Will always Love You.”

“Everyone is suffering over this,” he added. “I just feel that this was needed, so I came back to make sure that people have a nice Thanksgiving.”

Looking across the street, over the memorial of flowers and stuffed toys placed on the spot where his son fell in August, he held up a bird and called to a young woman: “You get one yet?”

She smiled and waved back, yes.

St Louis prosecutors have said they will hold a news conference to announce the grand jury decision, although the date, time and location remained undetermined.

NBC News reported on Saturday that the 12-member panel will resume meeting behind closed doors on Monday, meaning a decision whether to bring charges in the emotive case could still be some way off. Reuters could not independently confirm that report.

Anthony Gray, an attorney for the Brown family, told reporters on Friday that the deliberations could last an hour, a day, a week, or a month. “No one can forecast when that decision will actually be reached,” Gray said.

For three nights running, small groups of demonstrators have gathered outside the Ferguson police station to chant slogans and wave placards, sometimes outnumbered by members of the news media expecting a confrontation.

There have been a handful of arrests since Wednesday night. Almost all of them were for failure to disperse after officers told protesters not to block traffic, and were ignored.

The killing became a flashpoint for strained US race relations, triggering weeks of sometimes violent protests in Ferguson calling for the arrest of Wilson. He has instead been placed on administrative leave and gone into seclusion.

Missouri Governor Jay Nixon has declared a state of emergency and called in National Guard troops to back up police. Groups across the country have said they would take to the streets again in large numbers if charges are not brought.