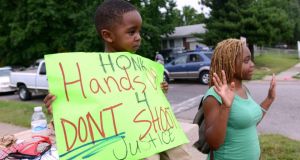 Marches, prayers and a moment of silence will take place on Sunday in Ferguson, Missouri, to mark a year since an unarmed black teenager was fatally shot by a white police officer, sparking large protests and a national debate on race and justice.

The shooting of 18-year-old Michael Brown on August 9th, 2014, thrust this mostly black St Louis suburb into the national spotlight and sparked months of protests, including incidents of rioting and arson. But it also gave life to a new movement under the “Black Lives Matter” banner, and spawned demonstrators determined to push for better treatment of minorities by police.

A makeshift memorial of teddy bears, candles and flowers has been rebuilt on the quiet residential road where Brown died, months after local officials removed a similar pile of offerings.

A plaque featuring a metallic dove has been installed on the sidewalk a few feet from the spot where Brown died, and the street where Brown’s blood pooled has been repaved.

Organisers of Sunday’s events say their aim is to keep alive a national movement fueled by the police killing of Brown and other unarmed black men in US cities including New York, Cincinnati, Baltimore and North Charleston, South Carolina.

For Brown’s father Michael Brown Sr, the past year has brought a painful reckoning as well as an evolution to activism that leaves him still angry, but also optimistic that perhaps his son did not die in vain.

“I hurt every day. But I’m trying to make it uncomfortable to people that think this is OK to do this stuff,” Mr Brown said. “It might help other families out.”

On Sunday, Mr Brown asked for protesters to observe 4-1/2 minutes of silence starting at 11.55am central time (16.55 GMT) to represent the roughly 4-1/2 hours his son’s body lay dead in the middle of the street after he was shot.

Mr Brown plans to follow that with a silent march aimed at honouring not just his son but others who have died at the hands of police.

A federal review found that the officer, Darren Wilson, broke no laws when he shot Brown. But it also determined that the Ferguson police department for years had violated the rights of the city’s black population.

Yvette Harris founded the St Louis-area nonprofit Mothers Against Senseless Killings after her 17-year-old son died in 2001 in a gang-related shooting. She said Brown’s death at the hands of a police officer sparked so much outrage because it was seen as just one in a long line of killings.

“There are so many killings going on around the country. People are mad, here and everywhere,” said Ms Harris, who is black. “It will be a long time before there is a healing.”

“People are afraid to come to Ferguson,” said Mr Jasper, who blames both the police and some of the protesters for the racial animosities that mark the community. “Things have to change. We’re all in this together.”