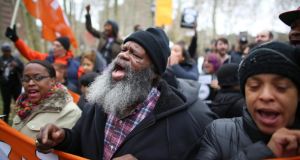 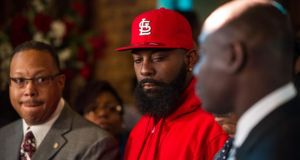 The town of Ferguson in Missouri was counting the cost of a night of violence triggered by Monday night’s announcement that a grand jury decided not to charge white police officer Darren Wilson over the killing of unarmed black teenager Michael Brown in August.

Missouri governor Jay Nixon called in more National Guard troops to restore order to the St Louis suburb the day after protests turned violent following the decision of 12 jurors not to indict Mr Wilson (28) over his shooting dead of Mr Brown (18) on a Ferguson street.

Police cars were destroyed and at least 150 gunshots were fired, many at St Louis police. There were 82 arrests, including 61 in Ferguson mostly for burglary, unlawful assembly and trespassing.

The violence was worse than the immediate aftermath of Mr Brown’s killing on August 9th that triggered weeks of civil unrest and a national debate about police tactics, particularly the treatment of young African-American men by white law-enforcement officers.

protesting against excessive police force against a racial minority, tried to protect shops and businesses from being attacked.

Fears that led many business owners to board up their shops were realised as West Florissant Avenue, the main business street in the town of 21,000 people, became the scene of the worst violence.

Hundreds of people blocked a bridge in New York, while the city’s police chief, Bill Bratton, was splattered with fake blood at a demonstration in Times Square. Several hundred people closed an interstate in Oakland and police were hit with fireworks in Seattle.

Pleas for calm from President Barack Obama, governor Nixon and the Brown family failed to stem the violence. In a televised address on Monday night, Mr Obama urged protestors to remain peaceful and police to show “care and restraint”. He said that while the jury’s decision had to be accepted, he acknowledged that some Americans were “deeply disappointed, even angry” and that this was “an understandable reaction”.

“The fact is, in too many parts of this country, a deep distrust exists between law enforcement and communities of colour,” said Mr Obama.

Announcing the grand jury’s decision, St Louis prosecutor Bob McCulloch said the nine white and three black jurors had reached their finding after “an exhaustive review” of all the evidence.

While there was no doubt that Mr Wilson was responsible for Mr Brown’s death, firing 12 shots at the teenager, the jury found “no probable cause exists” to file charges against him.

A lawyer for the Brown family said they “strenuously object” to the grand jury process and the prosecutor, questioning his independence and claiming he had a “symbiotic relationship” with police.

New footage, filmed by the New York Times, emerged of Mr Brown’s stepfather urging protestors to burn down the police station after the teen’s mother broke down while addressing protestors.

The prosecutor released 24 volumes of grand jury testimony showing how Mr Wilson, who took the unusual step of testifying, painted Mr Brown as the aggressor who punched him, tried to grab his gun and repeatedly charged at him even after he was repeatedly shot.

The police officer convinced the jury that he had believed his life was in danger and that he had been right to use lethal force against the teenager.