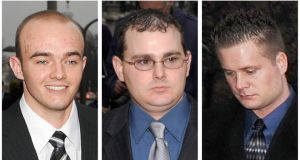 Nicholas Slatten (left), a former Army sniper from Tennessee, was sentenced to life in prison; Dustin Heard, also of Tennessee and Evan Liberty of New Hampshire were both sentenced to 30 years. Photograph: Reuters

The shooting left 17 people dead and was a gruesome nadir in the war in Iraq. It transformed Blackwater Worldwide from America’s wealthiest and most politically powerful security contractor into a symbol of unchecked and privatized military power.

Nicholas Slatten, a former Army sniper from Tennessee, was convicted of murder for firing the first fatal shots. Three others – Dustin Heard, also of Tennessee; Evan Liberty of New Hampshire; and Paul Slough of Texas – were convicted of manslaughter, attempted manslaughter and the use of a machine gun in a violent crime.

The last charge carried a mandatory 30-year prison sentence under a law passed during the crack cocaine epidemic.

Slatten was sentenced to life in prison, and Heard, Liberty and Slough to 30 years. The men are all in their 30s. The sentences were a long-fought diplomatic victory for the United States, which asked a sceptical Iraqi government and its people to be patient and trust the US criminal justice system.

That faith was tested many times over the last eight years as the case suffered several setbacks, many of which were of the government’s own making.

In the end, the Justice Department said, the case showed the world that the US judicial system worked, even in war zones, and even when the gunmen were Americans and the victims were Iraqis.

The former Blackwater contractors said insurgents had ambushed them, and they described the civilians as the unfortunate unintended casualties of war. Prosecutors, however, described the killings as a massacre of innocent people. In October, jurors agreed.

“What happened on September 16th, 2007, was nothing short of an atrocity. There’s just no other way to describe it,” T Patrick Martin, a US prosecutor, said before sentencing. He said “the United States has shown that regardless of the nationality of the victims, it values justice for all.”

Lawyers for the former contractors argued unsuccessfully that the judge should take the unusual step of ignoring mandatory minimum sentences. The defendants remain adamant that the shootings were justified.

“We all heard the evidence. There were innocent people that got killed,” said David Schertler, a lawyer for Heard. “The nub of the case, though, is that these men were not out to hurt people.”

Mohammad Kinani Al-Razzaq, whose 9-year-old son, Ali, was killed, said that in Iraq, Blackwater had been regarded as so powerful that its employees could kill anyone and get away with it.

“Blackwater had power like Saddam Hussein. The power comes from the United States,” he said.

He added later: “Today we see who will win. The law? Or Blackwater?”

A fifth former guard, Jeremy Ridgeway of California, pleaded guilty to voluntary manslaughter and testified against his former colleagues. He has not been sentenced.

At the trial, Iraqi witnesses testified that the Blackwater contractors had fired unprovoked on unarmed civilians who had been going about their day in the crowded intersection.

Former Blackwater employees who were in the convoy of armoured trucks that day also testified against their colleagues.