Donald Trump under fire is chillingly in his element 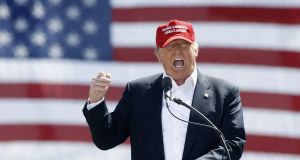 Most people would be upset to be at the centre of an agitated national debate about whether they were more like Hitler, Mussolini, Idi Amin, George Wallace or a Marvel villain. Not Donald Trump. He doesn’t like invidious comparisons, but he’s cool with being called an authoritarian.

“We need strength in this country,” he told me on Friday morning, speaking from his Fifth Avenue office. “We have weak leadership. Hillary is pathetically weak. She got us into Libya and she got us into Benghazi and she’s probably got 40 eggheads sitting around a table telling her what to do, and then she was sleeping when the phone call came in from the ambassador begging for help. You know, the 3am phone call?”

I asked the brand baron if he’s concerned that his brand has gone from fun to scary, from glittery New York celebrity to Saturday Night Live skits about him featuring allusions to the Ku Klux Klan and Hitler. He blamed a “disgustingly dishonest” press. I wondered about ex-wife Ivana telling her lawyer, according to Vanity Fair, that Trump kept a book of Hitler’s speeches by his bed. Or the talk in New York that in the 1990s he was reading Mein Kampf. Nein, he said. “I never had the book. I never read the book. I don’t care about the book.”

All over town, even in the building where I’m writing this column, freaked-out Republicans are plotting how to rip the nomination from Trump’s hot little hands. How does it feel to be labelled a menace, misogynist, bigot and xenophobe by your own party? “Honestly,” he replied, “I’m with the people. The people like Trump.”

Since he prefers to rely on himself for policy advice, is he seeking out expert help on the abstruse delegate rules? “Yeah,” he said, “I have people, very good people, the best people.” No details, as usual. Won’t a contested convention require more of a campaign than après moi, le déluge?

“I have an organisation, but it’s largely myself,” he said. More heavyweights are jumping in to stomp on Trump, including Elizabeth Warren. Asked about her jabs, he pounced: “I think it’s wonderful because the Indians can now partake in the future of the country. She’s got about as much Indian blood as I have. Her whole life was based on a fraud. She got into Harvard and all that because she said she was a minority.”

Told that President Barack Obama was mocking his wine as $5 wine marked up to $50, Trump shot back, “My wine has gone through the roof.” What about Mitt Romney, who’s pushing for an open convention? “He’s a jealous fool and not a bright person,” Trump said. “He’s good looking. Other than that, he’s got nothing.”

“I don’t think so,” Trump said, noting that he liked Ryan and that they’d talked. “All that matters is the votes. I see people making statements about me that are harsh and yet they are calling me on the other line saying, ‘Hey, when can we get together?’”

Mitch McConnell also urged Trump to ratchet down the ferocity. Trump insisted that “the violence is not caused by me. It’s caused by agitators.” He added that “Hillary is the one disrupting my rallies. It’s more Hillary than Sanders, I found out.” The Clinton campaign called this “patently false”.

But shouldn’t parents be able to bring children to rallies without worrying about obscenities, sucker punches, brawls and bullying? “The rallies are the safest places a child could be,” Trump replied primly. Didn’t the man rushing the stage give him pause? “I got credit for that because it looked like I was moving toward him.”

He said he would soon unleash the moniker that he thought would diminish Hillary, the way “Little Marco” and “Lyin’ Ted” torched his Republican rivals; “I want to get rid of the leftovers first.”

When he mocks Hillary, as he does in a new ad that shows her barking, it may backfire. Due to his inability to let go of his chew toy Megyn Kelly, Trump drew a remarkable rebuke on Friday night from Fox News after he called for a boycott of her show and tweeted that she was “crazy” and “sick”. Fox painted Trump as a stalker, saying he had an “extreme, sick obsession” with the anchor. Unable to resist, even though he knows I respect Kelly, he also described her to me as a “total whack job” with “no talent”.

He has a history of crude remarks about women from his visits to Howard Stern’s show that could be used in Hillary ads. A conservative anti-Trump super PAC is running an ad with women repeating his coarse remarks. “All of these politicians have said far worse than that,” Trump said, “drunk, standing in a corner.”

Joe Scarborough said that just as FDR was the master of radio and JFK of television, DJT is the titan of Twitter. The titan agreed, gloating about how his tweets to his seven million followers, sometimes penned in his jammies, become cable news bulletins.

“Yeah,” he said, “I’ll do them sometimes lying in bed.” Not exactly a fireside chat. But it sure started a fire.