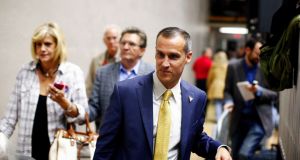 Corey Lewandowski: police in Jupiter, Florida, have charged him with intentionally grabbing and bruising the arm of Michelle Fields

US Republican presidential candidate Donald Trump vowed yesterday to stand by his campaign manager, despite the aide’s arrest over a misdemeanour battery charge, drawing criticism from rivals.

Mr Trump, in a round of television interviews, played down the incident involving a reporter and campaign manager Corey Lewandowski (42), who was arrested in Florida on Tuesday.

Police in Jupiter, Florida, charged Mr Lewandowski with intentionally grabbing and bruising the arm of Michelle Fields, then a reporter for conservative news outlet Breitbart, when she tried to question Mr Trump at a campaign event on March 8th.

Mr Trump and Mr Lewandowski had both initially denied the incident occurred.Yesterday, Mr Trump defended Mr Lewandowski and went on to allege the reporter had grabbed Mr Trump. He said he was considering legal action in response.

“I’m sure there will be a counterclaim coming down the line,” he told ABC News. “She made up this story,” Mr Trump added on NBC. He told Fox News that Mr Lewandowski had likely grabbed the reporter “unknowingly”.

Mr Trump leads his opponents, US senator Ted Cruz and Ohio governor John Kasich, in the race for 1,237 delegates needed to secure the nomination at this summer’s Republican Party convention.

Mr Cruz told CNN on Tuesday that “of course” he would fire Mr Lewandowski over the battery charge. – (Reuters)