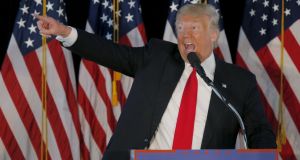 Republican presidential front-runner Donald Trump has rubbished a pact agreed by his rivals, Texas senator Ted Cruz and Ohio governor John Kasich, to try to block his path to the party nomination.

Mr Trump’s challengers mathematically cannot win the Republican race from the pledged delegates at stake in the remaining 15 states and on Sunday night their campaigns agreed to join forces and focus on campaigning in different states in an effort to stop the billionaire.

The election pact has helped bolster the businessman’s claims that the nominating process is a “crooked” system. He accused the two candidates of “collusion” against him.

“So they collude and actually I was happy because it shows how weak they are. It shows how pathetic they are.”

The property tycoon has 844 delegates and must reach a majority of 1,237 to clinch the nomination in the remaining state-by-state primaries that end when Californian Republicans vote on June 7th.

Mr Kasich (63) has agreed to skip campaigning in Indiana ahead of the state’s primary on May 3rd to give Mr Cruz (45) an edge over Mr Trump in the Hoosier State where three recent polls have shown the businessman leading by an average of six points.

Mr Cruz has, in return, agreed not to campaign in Oregon before its primary on May 17th or New Mexico which votes on June 7th.

There are 57 Republican delegates at stake in Indiana, five more than the combined total up for grabs in Oregon and New Mexico.

“After a discussion with the Kasich campaign, we made a decision about allocating resources,” Mr Cruz told reporters in Indiana.

“Governor Kasich decided to allocate his resources elsewhere. I think that made sense for both camps.”

The conservative senator, who trails Mr Trump by almost 300 pledged delegates awarded in state contests so far, rejected the businessman’s accusations of “collusion.”

“This is entirely about the will of the people,” said Mr Cruz.

Mr Kasich tried to play down the deal , saying that voters in Indiana “ought to” back him, despite his agreement with the Texan.

“We have to husband our resources. I feel that it’s very fair for me to be able to go to areas where I can spend my resources more effectively and the same is true for Senator Cruz. What’s the big deal?” he said.

Asked whether the deal was a sign of desperation, a tetchy Kasich told reporters huddled around him in a Philadelphia diner: “No, I’m not desperate - are you, are you desperate?”

The Ohio governor has just one state win, his home state, and sees his only way to the party nomination through a contested national party convention in Cleveland in July, pitching himself as the sole Republican candidate who can beat Hillary Clinton in November.

Blocking Mr Trump from a first-ballot victory with 1,237 delegates would open the nomination up to a “floor fight” and potentially multiple ballots where delegates would be free to vote as they wish.

The two candidates were campaigning ahead of five states in the north-east and mid-Atlantic area voting today - Connecticut, Delaware, Maryland, Pennsylvania and Rhode Island - where Mr Trump is expected fare well after his landslide win in New York last week.

There are 172 Republican delegates to be won today and 384 in the Democratic race in which Mrs Clinton is leading Vermont senator Bernie Sanders by double digits in Pennsylvania and Maryland.