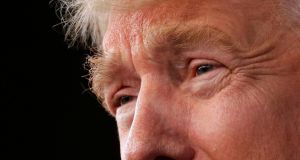 Despite piling up a vast fortune over the years, Donald Trump has seen his companies file at least four bankruptcies. Photograph: Jonathan Ernst/Reuters

When Donald Trump takes the oath of office on January 20th, the fact he will be the oldest person to do so in America’s 240-year history will be something of an afterthought.

On that day a business tycoon, reality TV celebrity and architect of one of the most divisive and incendiary campaigns in memory , a campaign that has raised comparisons to Hitler and Mussolini , will become the most powerful person on the planet, his finger on the nuclear trigger.

This is no ordinary candidate in no ordinary year. Trump will be the first person in more than 60 years to enter the White House with no experience as a governor or on Capitol Hill. Many words have been used by critics to describe him: bigot, blowhard, demagogue, idiot, misogynist, narcissist, racist, sexual predator. Tony Schwartz, who ghost-wrote Trump’s bestselling book The Art of the Deal, said if he was writing it now, he would call it The Sociopath.

Trump is “the blue-collar billionaire“ who lives the high life of golf and private jets but appeals to those who feel dispossessed and believe the American dream is dead. He launched his campaign in June 2015 with a tirade against immigrants - he branded Mexicans criminals and rapists - although he himself is descended from them.

His mother, Mary MacLeod, was from Stornoway in the Outer Hebrides, once described by Trump as “serious Scotland“. His father, Fred, was the son of Friedrich Trump, who at 16 arrived on a boat in lower Manhattan in 1885, learned English and became a US citizen.

Setting up home in Queens, New York, Fred Trump built a property empire and became one of the city‘s biggest developers and landlords. Donald Trump was born there on 14 June 1946, the fourth of five children.

On Sundays the family worshipped at Marble Collegiate church in Manhattan, where the head pastor was Norman Vincent Peale, dubbed “God‘s salesman“ and author of The Power Of Positive Thinking. That book influenced the young Trump with advice such as: “Formulate and stamp indelibly on your mind a mental picture of yourself as succeeding. Hold this picture tenaciously. Never permit it to fade. Your mind will seek to develop the picture ? Do not build up obstacles in your imagination.”

Trump had a rebellious streak and, aged 13, his parents sent him to the New York Military Academy in hope of instilling discipline. It worked. He thrived on the competition over everything from tidying his room to shining his shoes and climbed the ranks. Through five educational and medical deferments during the Vietnam war, Trump would never serve in the US military, but he claimed that the school gave him “more training militarily than a lot of the guys that go into the military”.

Trump went on to Fordham University, then the Wharton School at the University of Pennsylvania, graduating with a degree in economics in 1968. He joined his father’s business, helping manage residential housing projects for the middle class in New York boroughs Brooklyn and Queens, and became favourite to succeed him after his elder brother, a pilot, died at 43 due to alcoholism. It was a tragedy that Trump said led him to avoid alcohol, cigarettes and drugs all his life.

‘Small loan of a million dollars’

Trump took control of the company in 1971, renaming it the Trump Organization, and claimed his father gave him a “small loan of a million dollars” to help. The firm expanded into Manhattan, transforming the rundown Commodore Hotel into the Grand Hyatt and erecting the 58-storey Trump Tower on Fifth Avenue, which serves as both his primary residence and the headquarters of the Trump Organization. In 1973 the Trumps were charged with racial bias in their rental practices before reaching a settlement with the US government.

Other properties bearing his name followed, including golf courses, the Mar-a-Lago resort in Florida, New York‘s venerable Plaza Hotel and casinos. Around the world there were Trump Towers in Mumbai, Istanbul and the Phiippines.

Despite piling up a vast fortune over the years, Trump has seen his companies file at least four bankruptcies.

During the second presidential debate, Trump admitted using a $916m loss claimed in 1995 to avoid paying federal income tax for many years. According to Forbes, Trump‘s net worth is $3.7bn, although he has repeatedly claimed he is worth $10bn.

Trump also moved into the entertainment industry, owning the Miss Universe, Miss USA and Miss Teen USA beauty pageants from 1996 to 2015. In 2003, his celebrity soared with The Apprentice, the TV show in which contestants battled for a shot at a management job within his organisation and he could say with relish, “You‘re fired!“ He claimed in a financial disclosure form that he was paid a total of $213m by NBC.

But as far-fetched as it seems, Trump‘s hostile takeover of the political scene is not entirely unexpected. Once a registered Democrat and donor to the party, he reportedly expressed an interest in running for president as early as 1987 and entered the 2000 race as a Reform party candidate. He also led the “birther movement“ after repeatedly questioning the birthplace of Barack Obama.

He finally conceded this year that the US president was born in Hawaii but offered no apology, fuelling the allegation that he had run a racially charged, white nativist campaign.

Last December, in a speech following the deaths of 14 people in a terrorist shooting attack in San Bernardino, California, he said: “Donald J Trump is calling for a total and complete shutdown of Muslims entering the United States until our country‘s representatives can figure out what the hell is going on.“ The pledge was later altered to cover people “from regions that export terrorism”.

Yet his dark vision of America, and his promise to make it “great again“, resonated with swaths of the country, especially white men who felt themselves economically and culturally in retreat. He defeated 16 rivals in the Republican primary, including Jeb Bush, the son and brother of past presidents, and arch-conservative Ted Cruz, with a record number of votes.

His rallies were like rock star events - he called his campaign a movement - even as he hurled insults and trampled over numerous political norms and values. Not even a 2005 video in which he boasted about groping women, and subsequent allegations of harassment from a dozen women, could derail him. “I have great respect for women,“ he improbably asserted. “Nobody has more respect for women than I do.“

His private life is far from conventional for a president. His first marriage to Czech athlete and model Ivana Zelnikova ended in divorce in 1990. The couple had three children, Donald Jr, Ivanka and Eric, all of whom have become prominent surrogates on the trail. In a 2006 interview on The View, Trump said: “If Ivanka weren‘t my daughter, perhaps I‘d be dating her.”

He married actor Marla Maples in 1993 before they separated in 1997 and divorced in 1999; they have one daughter, Tiffany. The billionaire began dating his third wife, Slovenian-born model Melania Knauss, in 1998. The pair married in 2005 - the Clintons were among the guests - and a year later their son, Barron, was born.

Trump once said his supporters were so loyal that he could shoot someone on Fifth Avenue in New York and not lose a single vote. It more or less proved to be true.

1 Ireland could lose out as France lays claim to most of €5bn Brexit compensation fund
2 Miriam Lord: The Dáil's answer to John Wayne overcooks the ham slice, by slice, by slice
3 Boy (4) left in hospital for over two years due to Tusla and HSE failings, report says
4 Q&A: What restrictions are going to be lifted next week?
5 Majority of Covid-19 outbreaks in last week were in private houses
Real news has value SUBSCRIBE