Donald Trump made 2015 the Year of the Outsider

World review of the year: Brash businessman stunned many by leading Republican race 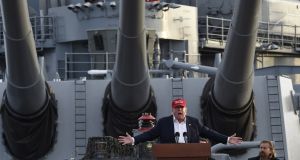 Whether he wins or not, Donald Trump will be moving in on Pennsylvania Avenue in 2016. Democrats will be hoping it will be the Old Post Office Pavilion, home to Trump’s soon-to-open hotel, rather than the White House five blocks away, that will be his new address after the November 2016 ballot to elect a successor to Democratic president Barack Obama.

Trump was written off as a joke and his campaign as another self-aggrandising, ego-stroking stunt by the property tycoon and reality TV star when he launched his presidential bid in June. Since then, he has stunned political scientists and pollsters, the media and his own Republican Party by soaring to the top of the polls and shown an unexpected resilience by mostly staying there for the past five months.

His hard-hitting rhetoric – a rage-against-the-Washington-machine megaphone mix of Islamophobic, anti-immigrant bombast – has energised a grassroots frustrated with a political elite who they believe have left them less safe and less well off.

Trump’s simple plan, to “Make America Great Again”, has mobilised older, uneducated white supporters pining for a time when the world was less complex and dangerous and America’s dominant place in it was assured.

The anti-establishment candidate made 2015 the Year of the Outsider. His no- holds-barred populism and simplistic black-and-white solutions to complex problems – such as barring all Muslims from entering the US in the response to the attacks by Islamic jihadists in Paris and San Bernardino – has corralled about a 25 to 30 per cent bloc of Republicans at a time when almost seven in every 10 Americans say Obama has not been tough enough on Islamic State militants.

Trump has lost ground in recent polls to his surging rival, Texas senator and conservative firebrand Ted Cruz, in Iowa which kicks off the nominating process with the state’s February 1st caucuses.

Cruz, a thorn in the side of the Republican leadership on Capitol Hill, is equally popular among many of the mad-as-hell voters where Trump has found his base.

Being able to attract fiscal and social conservatives, evangelicals and the traditional non-voters switched on by Trump’s campaign could benefit Cruz and give him an edge coming out of Iowa.

The size of the Republican field is rewriting the standard primary guidebook that has traditionally shown three tickets out of Iowa and two out of New Hampshire, the second state to pick candidates in the February 9th primary.

New Hampshire, where establishment figures tend to fare well, could have less bearing. There are so many establishment candidates – New Jersey governor Chris Christie, former Florida governor Jeb Bush and Florida senator Marco Rubio – competing for centrists that there is no single strong moderate voice to challenge Trump or Cruz.

While some polls have given Trump a sizeable lead, his electability is an issue.

A Gallup survey earlier this month found Trump the least-liked candidate, with 32 per cent saying they had a favourable view of him compared with 59 per cent with an unfavourable view. This leaves him with a mountain to climb if he emerges as the nominee and hopes to win over moderates and independents needed to take the White House.

If he isn’t the nominee, his anti-immigrant campaign will leave the party’s candidate with a major job of restoring the Republican brand among electorally important minority voters.

A rogue Trump, reneging on his promise to support the Republican nominee and running as an independent, would undoubtedly split the party’s vote and hand the Democrats victory next year.

She beats Trump or Cruz in a hypothetical match-up but would trail Rubio or retired surgeon Ben Carson, who has slipped in the polls, according to a NBC News/Wall Street Journal poll published two weeks ago. The Clinton camp fears Rubio the most, given the younger candidate’s ability to paint himself as the fresh-faced candidate up against another Clinton running for president.

The challenge for the Republican Party is picking a nominee without suffering self-inflicted wounds on a vitriolic campaign that will hobble the eventual candidate in the presidential ballot in 315 days.

Given where Trump has brought – and may yet bring – his party in the coming months, the prospect of another President Clinton driving past his newly opened hotel in her inaugural parade may be very real.