Donald Trump claims only he can fix ‘complex tax laws’ 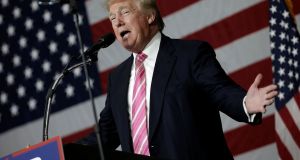 Republican presidential nominee Donald Trump: The Clinton campaign has called the New York Times report about the Republican nominee’s taxes a “bombshell”, and called for him to release his full tax returns. Photograph: Mike Segar/Reuters

Donald Trump responded on Sunday morning to a New York Times report that he may not have paid federal income tax for 18 years, tweeting: “I know our complex tax laws better than anyone who has ever run for president and am the only one who can fix them.”

The Clinton campaign called the report about the Republican nominee’s taxes a “bombshell”, and called for him to release his full tax returns. Bernie Sanders, once Hillary Clinton’s opponent for the Democratic nomination and now a supporter of her campaign, said the report was evidence of “a corrupt political system in this country”.

Mr Trump did not deny the report, which was based on documents from his 1995 tax return, mailed to the newspaper by an anonymous source.

Susanne Craig, the reporter to whom the documents were sent, told CNN on Sunday morning the Trump camp had “threatened to sue the paper, saying tax returns are confidential, and we made a decision last night to go forward”.

The New York Times report did not accuse Trump of any illegal practice, but citing analysis by tax experts, suggested that by registering a loss of $916 million, the businessman could have cancelled out equivalent taxable income until 2013.

Former New York mayor Rudy Giuliani told CNN: “Well all I have is the New York Times story to go on, so let’s comment on it as if it were true. This is perfectly legal.”

“He has an obligation as the head of a business to take advantage of and to use the lawful deductions and tax advantages that are available to you. The man is a genius, he knows how to operate the tax code for the benefit of the people he is serving.”

Speaking in support of Mrs Clinton, Mr Sanders told ABC: “If everyone in this country was a genius like Mr Trump and did not pay taxes, we would not have a country.”

“This is exactly why so many millions of Americans are frustrated,” he added to CNN. “They are angry, they are disgusted at what they see as a corrupt political system in this country.”

On Sunday, Sanders said: “You have middle class people working longer hours for low wages, they pay their taxes. They support their schools, they support their infrastructure, they support the military, but the billionaires, no, they don’t have to do that because they have their friends on Capitol Hill. They pay zero in taxes.

“So Trump goes around and says, ‘Hey, I’m worth billions, I’m a successful business man, but I don’t pay any taxes, but you, you who earn 15 bucks an hour, you pay the taxes. That’s why people are angry and want real change in this country.”

Jack Mitnick, a “semiretired” accountant who according to the New York Times handled Trump’s taxes for three decades, told the paper Trump had a “brash and undisciplined style”.

Mitnick (80) who prepared a New Jersey return obtained by the newspaper, “recalled, for example, that when Donald and Ivana Trump came in each year to sign their tax forms, it was almost always Ivana who asked more questions”.

Mr Trump has refused to release tax returns, saying that he cannot do so while under audit. There is no rule preventing the release of records. Mrs Clinton has released tax returns dating back to 1977.

In the first presidential debate, on Monday, Trump broached the question of his tax returns. When Clinton wondered aloud whether such records would reveal that Trump was “not as rich as he says he is” or “not as charitable as he claims to be”, or whether he had paid “nothing in federal taxes”, Trump interjected: “That makes me smart.”

Speaking to ABC, Mr Giuliani said “the only thing she has ever produced is a lot of work for the FBI, checking out her emails”.

In a statement issued on Saturday night, the Trump campaign did not deny the allegations in the New York Times report.

“The only news here is that the more than 20-year-old alleged tax document was illegally obtained,” the campaign said, “a further demonstration that the New York Times, like establishment media in general, is an extension of the Clinton campaign, the Democratic party and their global special interests.

“Mr Trump is a highly-skilled businessman who has a fiduciary responsibility to his business, his family and his employees to pay no more tax than legally required.”

That list did not include the words “federal income taxes”, or provide details about what taxes Trump may have paid.

Mrs Clinton’s campaign manager, Robby Mook, said the report was a “bombshell” which “reveals the colossal nature of Donald Trump’s past business failures and just how long he may have avoided paying any federal income taxes whatsoever”.