US Republican presidential front-runner Donald Trump suggests that 'there has to be some form of punishment' for women who undergo abortions in America. Video: MSNBC 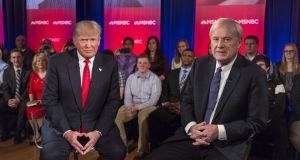 Donald Trump last night moved to clarify his position on abortion after a strong reaction to his comments that women who have abortions should receive “some form of punishment” .

“There has to be some form of punishment,” Mr Trump told MSNBC’s Chris Matthews during an exchange over whether abortion should be banned. Pressed by Mr Matthews, Mr Trump said: “I haven’t determined what the punishment should be”.

Mr Trump’s comments immediately provoked negative reactions. “Just when you thought it wouldn’t get worse”, Hillary Clinton wrote on Twitter, adding that the remarks were “horrific and telling”.

Mr Trump later released a statement. “If Congress were to pass legislation making abortion illegal and the federal courts upheld this legislation, or any state were permitted to ban abortion under state and federal law, the doctor or any other person performing this illegal act upon a woman would be held legally responsible, not the woman”, he said.

“The woman is a victim in this case, as is the life in her womb. My position has not changed – like Ronald Reagan, I am pro-life with exceptions.”