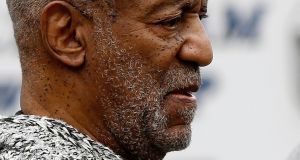 Bill Cosby’s defence will argue that he had a deal with a suburban Philadelphia prosecutor in 2005 that he would not be prosecuted and should give evidence freely in accuser Andrea Constand’s civil lawsuit. Photograph: Matt Rourke/AP 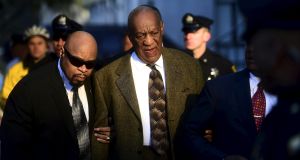 A former Pennsylvania district attorney who declined in 2005 to prosecute Bill Cosby for sexual assault testified on Tuesday he had concerns about the credibility of the woman who has accused the now-disgraced comedian of drugging and raping her.

Former Montgomery County district attorney Bruce Castor said Andrea Constand’s credibility as a witness could have been undermined a decade ago because she waited a year to file her criminal complaint against Cosby and had hired a lawyer to explore a civil lawsuit.

“I decided that because of defects in the case, the case could not be won and that I was going to make a decision that we would not prosecute Mr Cosby,” Mr Castor said during a hearing in a suburban Philadelphia court, where Cosby faces new charges in the case.

“Making Mr Cosby pay money to Ms Constand was the best I would be able to set the state for because a prosecution was not viable and never would be.”

Cosby’s attorneys contend that an agreement with the former district attorney protected the entertainer from prosecution.

More than 50 women have accused Cosby (78), of drugging and sexually assaulting them, but Constand’s case is the only one to result in criminal charges. The wave of allegations has cost Cosby, who made a long career on family-friendly comedy, his status as one of the United States’ most-admired entertainers.

Cosby has repeatedly denied wrongdoing. Many of the cases date to the 1960s and 1970s, making them ineligible for criminal prosecution, although some of his alleged victims also have filed a series of civil lawsuits claiming Cosby defamed them by calling them liars.

In his testimony, Castor said his decision not to prosecute Cosby prevented the entertainer from invoking his constitutional right against self-incrimination when he gave a deposition for a civil suit against Constand, a former women’s basketball team manager at his alma mater, Temple University.

A judge last year unsealed that testimony, in which Cosby acknowledged giving Benadryl, an anti-allergy medication, to Constand in 2004 but portrayed the encounter as consensual. The Montgomery County District Attorney’s office charged Cosby in connection with that incident in late December, days before the statute of limitations was to expire. Constand, now 44, said Cosby plied her with drugs and alcohol before sexually assaulting her. Dressed in a dark brown suit, walking with a cane and flanked by attorneys and what appeared to be a security guard,

Cosby sat stonily during Tuesday’s proceeding and did not speak.