Patrol officer kills armed suspect who fled after being pulled over, authorities say 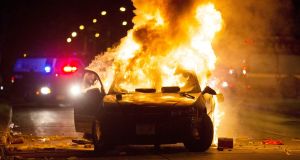 A car burns as a crowd of more than 100 people gathers following the fatal shooting of a man in Milwaukee on Saturday. Photograph: Calvin Mattheis/Milwaukee Journal-Sentinel via AP

Protesters fired gunshots, hurled bricks and set a gas station on fire in Milwaukee on Saturday night, hours after a patrol officer shot and killed an armed suspect who took flight after a traffic stop, authorities said.

The 23-year-old suspect, who had a lengthy arrest record, was carrying a stolen handgun loaded with 23 rounds of ammunition when police pulled over the vehicle for “suspicious activity,” authorities said. A second suspect who fled from the vehicle was quickly taken into custody.

A statement by the Milwaukee Police Department did not say whether the suspect who was killed had fired any shots or pointed the weapon at officers during the incident.

Authorities did not disclose the race or the name of the suspect or the uniformed officer.

After the shooting, which occurred in a predominately African-American section of Milwaukee, protesters fired shots and hurled rocks as police attempted to disperse the crowd, which local media reported numbered more than 100.

The windows of at least two squad cars were smashed, and one officer sitting inside one of the vehicles was hit in the head with a brick.

Protesters set another police car on fire and a gas station ablaze. Fires broke out at least three other businesses, including an auto parts store, the local ABC affiliate WISN reported on its website.

“Our city is in turmoil tonight,” said Alderman Ashanti Hamilton, president of the Milwaukee Common Council, said at a news conference as he appealed for calm.

The disturbances were the latest in a series of protests, most of them peaceful, that have broken out in US cities over the past two years after high-profile killings by law enforcement officers in Baltimore, New York and Ferguson, Missouri.

The outrage over police violence has given rise to the Black Lives Matter movement and touched off a national debate over the race and policing in the United States.

“This is a warning cry,” Milwaukee Alderman Khalif Rainey said. “Black people of Milwaukee are tired. They are tired of living under this oppression.”

Police made three arrests in connection with the unrest, according to assistant police chief James Harpole, adding that gunshots were fired from various locations during the disturbances.

The officer involved in the shooting is 24 years old and a six-year veteran of the force, police said. He was placed on administrative duty during the investigation and subsequent review by the Milwaukee County District Attorney’s Office, a standard practice after shootings by law enforcement officers.

Milwaukee Police Assistant Chief Bill Jessup told the Milwaukee Journal Sentinel that it was not clear if the suspect pointed the gun or fired at the officers.

“Those additional facts will come out in the coming days,” Mr Jessup said.

Saturday’s police shooting came after a violent night in Milwaukee. Five men were killed in nine shootings across the city, including a 36-year-old and 34-year-old who were fatally wounded outside a bar.