Arrests have been reported Minnesota after objects were hurled during a protest against police killings of black men in separate incidents. Video: Reuters 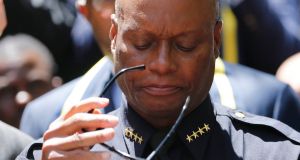 Dallas Police Chief David Brown said he was convinced any hesitation in giving the go-ahead to kill the shooting suspect on Thursday night would have allowed the gunman the chance to harm more police officers. Photograph: Erik S Lesser/EPA 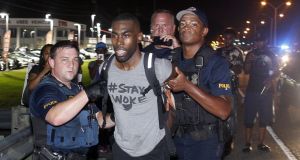 Police arrest activist DeRay McKesson during a protest along Airline Highway, a major road that passes in front of the Baton Rouge police department headquarters on Saturday in Baton Rouge, Louisiana. Photograph: AP 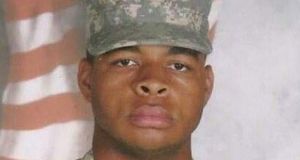 The chief of the Dallas Police Department on Sunday vigorously defended the use of a bomb mounted on a robot to kill a gunman who shot to death five police officers during a march to protest police violence against black people.

In taking personal responsibility for approving the plan in the aftermath of Thursday’s shootings, Chief David Brown said he was convinced that any hesitation in giving the go-ahead would have allowed the gunman the chance to harm other officers.

“I approved it and would do it again if presented with same circumstances,” Mr Brown told CNN, referring to the strategy of deploying a bomb-equipped robot into a room where the suspect was holed up after his shooting rampage.

That strategy revived the debate over militarisation of US law enforcement. Police were sharply criticised in 2014 after deploying military-style guns and armour to quell protests against the killing of an unarmed black teenager in Ferguson, Missouri.

After two hours of fruitless negotiations with the Dallas gunman, Mr Brown asked senior officers to “use their imaginations” to devise a strategy to disable the shooter, later identified as Micah Xavier Johnson (25), a former US Army Reserve soldier who authorities said had embraced black nationalism.

“He seemed very much in control and very determined to hurt other officers,” said the police chief, who revealed that Johnson taunted negotiators and asked them how many officers he had shot. “Without our actions, he would have, he would have hurt more officers,” he said.

Mr Brown said he stood by his decision, but understood why questions have been raised about the use of deadly force against the gunman, rather than opting for a non-lethal method to disable him.

“I appreciate critics but they are not on the ground. And their lives are not at risk,” Mr Brown said.

While stopping short of directly criticising the decision, New York City police commissioner Bill Bratton on Sunday said a broad policy discussion should take place before law enforcement resorts to such tactics on a regular basis.

“It is something that needs to be done in a very public way,” Mr Bratton said on ABC’s This Week programme. “It is the first time that type of action has been initiated here in the United States and it deserves to be reviewed.”

US law enforcement has used remotely controlled devices before to help stop suspects but not to kill anyone, experts say. Such devices are often used by police to dispose of or detonate bombs without risking human life.

A year ago, President Barack Obama banned police departments from using certain military hardware and restricted the use of riot shields and other equipment.

Mr Obama said the ban would encourage trust-building between police and the communities they serve.

Meanwhile, continued protests against the shootings of two black men by police officers shut down main arteries in a number of US cities on Saturday, leading to numerous arrests, scuffles and injuries in confrontations between police and demonstrators.

Undeterred by heightened concerns about safety at protests after a lone gunman killed five police officers in Dallas on Thursday night, organisers went ahead with marches in the biggest metropolis, New York City, and Washington DC, the nation’s capital, among other cities.

It was the third straight day of widespread protests after the fatal shooting of Alton Sterling (37) by police in Baton Rouge on Tuesday and the death of Philando Castile (32) on Wednesday night in a St Paul, Minnesota suburb, cities which both saw heated protests on Saturday.

The most recent shooting deaths by police come after several years of contentious killings by law enforcement officers, including that of Michael Brown, a teenager whose death in the summer of 2014 caused riots and weeks of protests in the St Louis suburb of Ferguson.

On Saturday evening, hundreds of protesters shut down I-94, a major thoroughfare linking the Twin Cities, snarling traffic.

Protesters at the scene said police fired tear gas and rubber bullets. Police said early on Sunday they had begun clearing the highway of debris in preparation for reopening it.

A march in Baton Rouge saw scuffles between riot police and Black Panther activists, several of whom carried shotguns. Louisiana law allows for weapons to be carried openly.

After a short standoff later in the evening, riot police arrested as many as 30 demonstrators and recovered weapons. Prominent black activist and former Baltimore mayoral candidate Deray McKesson was among those arrested.

Hundreds of protesters marched from City Hall to Union Square in New York. The crowd swelled to about 1,000 people, closing down Fifth Avenue.

Some chanted “No racist police, no justice, no peace” as rain fell in New York.

New York police said they arrested about a dozen protesters for shutting down a major city highway.