Crystal-clear lesson for Ireland in US glass-making revival

Environment Editor Frank McDonald reports from the Waterford Crystal Visitor Centre during his visit to Waterford for his Cities in Transition series.Video : Bryan O'Brien 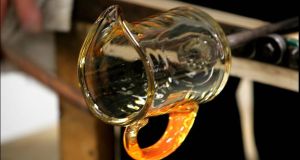 A glass jug is produced at the Waterford Crystal factory that opened in 2010. Photograph: David Sleator

Next month, Taoiseach Enda Kenny is likely to hand president Barack Obama shamrock in an Irish crystal bowl at a ceremony in the White House, a St Patrick’s Day tradition
dating back 62 years.

The crystal bowl, in most of those years made by the skilled glass blowers, cutters and engravers at Waterford Crystal, has become a symbol of the friendship between Ireland and the US. But it could be seen as a symbol of something else: the demise of Irish manufacturing and a missed chance to replicate a booming American craft industry in Ireland’s southeast.

In the US northwest, out of a small, ramshackle glass- making school, a blossoming hub of craft work and manufacturing has arisen. Glass sculptor Dale Chihuly co-founded the Pilchuck Glass School in 1971 with a makeshift furnace and a few shacks in a forest north of Seattle. Since then the school has become a magnet for glass- makers.

Pilchuck spawned workshops, galleries and museums, and attracted famous craftsfolk from Murano in Italy, the previous mecca for glassmaking, helping to revitalise the industry with a new clientele. Smaller schools were established that allowed artists pass on their skills.

At a time when Obama is championing a resurgence in manufacturing as an engine for economic growth and job creation, the Seattle hub shows how skilled crafts and manufacturing can be symbiotic.

Where the Seattle area has prospered, Waterford has struggled. An exhibition of Irish glass running in the Museum of Glass in Chihuly’s home town of Tacoma, south of Seattle, highlights the contrasts between the vibrant glass-making centre where the museum is located and the skilled craft work of former Waterford Crystal sculptors who could offer similar possibilities for that corner of Ireland.

Curtis, a virtuoso sculptor, designed the boat bowl Kenny gave Obama in 2011, as well as bowls for the previous two
US presidents. Among the pieces the four artists have created is a series of glass instruments musician Liam
Ó Maonlaoí has used to record incantation.


Liquidator’s sale
In 2009 de Buitléar and her collaborators happened coincidentally to attend the liquidator’s sale of the machinery following the closure of the Waterford Crystal factory. The liquidator had to secure the best price for the equipment, something that bothered de Buitléar because at the sale she saw an opportunity for glassmakers to start a business with the equipment had it not been prohibitively priced.

“I got frustrated. I saw everything leaving the country,” she said. Acknowledging that the popularity of crystal giftware and wedding presents had passed, she said: “We have to reinvent working with it.”

A residency at the Museum of Glass in 2010 gave de Buitléar the idea to approach the three glass masters – craftsmen who were the “top brass” at Waterford Crystal, she said – to create this exhibition showing a possible future for Irish glass-making.

Hartley, during his residency at the museum last year, was struck with how glass-making was introduced to students at such a young age. During one class he was impressed with a cocksure 17-year-old student working with molten glass and was gobsmacked to learn that he had been working with glass since he was 10. “He said to me, kind of boasting, ‘I am getting good at this’,” Hartley recalled.


Slow demise
At Waterford Crystal, Hartley foresaw the slow demise in Irish glass-making. As the company became bigger, the profit margin overshadowed everything, at a cost.

“There was no opportunity to carry on the craft,” he said. “It was about how can we do it faster, how can turn out more product, larger quantities. It was very difficult to get someone in Waterford to have the vision to say: ‘Let’s look at other areas of glass-making, more art-type work, more free-blowing’.”

Chihuly opened people’s eyes to where the art of glassmaking could go, Hartley said, and education passed his passion on to others. The American sculptor’s work features in places as diverse as the Bellagio hotel casino in Las Vegas and the Victoria and Albert Museum in London. While Waterford Crystal still operates a small manufacturing facility in Waterford, de Buitléar said that there are no apprenticeships available in the city, nor are their any third- level courses in glass-making or glass design or sculpture.

She said the same skills remained in Waterford and that there should be a debate about preserving them in a way that created a contemporary role for the craft.

Hartley believes what has been created around Seattle can be replicated in Waterford and that the best way to achieve this is to pass Waterford’s skills on to the next generation before they are lost.

“It is sellable and doable if you get the people involved who have the vision for it,” he said. “If we do like Seattle did and look at a way of educating, maybe we can make our young people want to travel that road, put the excitement back into it and make it the fashionable thing to do.”