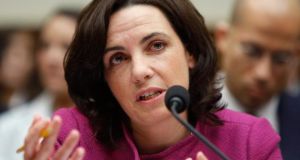 Revelations about a crashed computer hard drive and thousands of missing emails have reheated a controversy around the targeting of Tea Party and other conservative groups by the Internal Revenue Service, the US tax agency.

The scandal, which has fuelled Republican conspiracy theories around politically-motivated attacks on the party’s base, had slipped off the mainstream US news until last week.

The tax authority informed a congressional panel investigating the targeting of conservative groups on the Republican right that it had lost two years’ worth of emails on a computer belonging to retired IRS administrator Lois Lerner, the tax official at the centre of the inquiry.

In heated exchanges between Darrell Issa, the combative Republican congressman leading the investigation, and an IRS official, the chairman of the House Oversight Committee claimed that the taxman misled Congress about when officials knew about the lost emails and why this was not disclosed sooner.

Issa accused John Koskinen, the IRS commissioner before a congressional panel on Monday for the second time in four days, of lying by telling investigators that he first learned of the 2011 problem with Lerner’s computer in February and only knew of the lost emails in late April when Republicans claimed he should have disclosed the hard drive issue when he testified in March.

“Frankly, I’m sick and tired of your game playing in regards to congressional oversight,” Issa told the IRS commissioner. “At a minimum, you did not tell the whole truth that you knew . . .We are just a little questioning what your word is worth.”

Issa, who has compared the controversy to the Watergate scandal, has accused the IRS commissioner of not coming back to Congress to explain about the missing emails.

“I did not say I’d give you emails that disappeared,” Koskinen said. “If you have a magical way of doing that, I’d be happy to do that.”

“I’ve lost my patience with you,” Issa responded.

The testy back-and-forths have fuelled suggestions about the potential partisan motivations of the congressional inquiries and Republican anger about the intrusive nature of “big government” in a mid- term election year when candidates are playing up the unpopularity of federal over-reach into American lives.

The long-running controversy has its roots in a decision of the Supreme Court in 2010 that eased restrictions on political spending by organisations unaffiliated to candidate campaigns, spawning a surge in applications for tax exemption for new non-profit political groups.

US Treasury investigators last year found that IRS officials in Cincinnati, Ohio used a list of key words in the names of organisations to investigate certain groups but that they were part of a “broad spectrum” of political phrases used to direct audits, including into liberal groups.

Republicans have suggested that the IRS interest may have been driven by the White House but have produced no evidence to prove this allegation.

The lost emails and hard- drive crashes are the subject of intensive scrutiny since Lerner has retired and refused to testify before Congress pleading her constitution right against self-incrimination, a refusal that led her to be charged with contempt of Congress. The circumstances surrounding the loss of the emails in 2012 are being investigated separately, by the inspector general for tax administration at the US Treasury. Congressmen are still looking for their own answers.

“All the evidence is to the contrary,” said Koskinen.