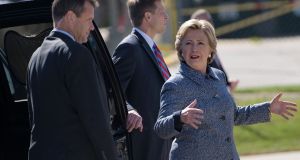 Mrs Clinton’s 10-city tour of Iowa brought the Democratic presidential nominee back to a state where she eked out a win in the caucuses over Bernie Sanders.

With her focus now on defeating Donald Trump, she was hoping that putting an emphasis on early voting could help her replicate President Barack Obama’s successful strategy in the battleground state four years ago.

It is a traditionally Democratic issue, which Mr Trump has recently taken on, prompted largely by interest from his daughter, Ivanka.

The Republican nominee was holding a rally in New Hampshire on Thursday, a day after Mrs Clinton campaigned there with Mr Sanders in an appeal to young voters.

While Mrs Clinton sought to broaden her appeal to voters still on the fence, Mr Trump was sticking with his strategy of focusing on the loyal base of working-class voters whose enthusiasm has driven his campaign.

Mr Trump has brushed off criticism of his performance in the first presidential debate that has come from supporters and opponents alike.

The survey, a gimmick intended to engage supporters online, asks whether Mr Trump should use the second debate to criticise Mrs Clinton for her policies on terrorism, economics and trade – questions sure to elicit an enthusiastic “yes” from backers.

Absent was any inquiry about whether Mr Trump should bring up former president Bill Clinton’s infidelities, as he has repeatedly threatened to do.

In another reminder of how far this year’s presidential campaign has veered into baffling territory, third-party candidate Gary Johnson was being ridiculed after he was unable, in a television appearance, to name a single world leader he admired.

“I’m having a brain freeze,” Mr Johnson said on Wednesday.

The magazine said Mr Trump reimbursed the consulting firm for $68,000 in business expenses for its Cuba work – even though neither he nor the firm had sought a federal government waiver that would have allowed them to pursue such activities.

Mrs Clinton’s focus on early voting reflects the premium Democrats are placing this year on getting their voters to turn out – if possible, long before November 8th.

Although the political map favours Mrs Clinton, Democrats are concerned that a lack of enthusiasm will keep their voters from showing up in the same numbers that led to Mr Obama’s victories in the last two elections.