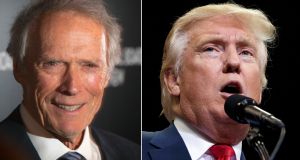 Clint Eastwood has declared his support for Donald Trump in the US presidential election. Photograph: Reuters/PA

Clint Eastwood, the 86-year-old four-time Oscar winner, excoriated the current generation of Americans as weak and overly sensitive while backing Donald Trump even though the Republican presidential hopeful has “said a lot of dumb things.”

Eastwood, a prominent celebrity supporter of the Republican Party who appeared at its 2012 US presidential nominating convention, offered a harsh assessment of Americans in an interview with Esquire magazine published on Wednesday.

“He’s onto something because secretly everybody’s getting tired of political correctness, kissing up,” the acclaimed actor and director said of Trump. “That’s the kiss-ass generation we’re in right now. We’re really in a pussy generation. Everybody’s walking on eggshells.

“We see people accusing people of being racist and all kinds of stuff. When I grew up, those things weren’t called racist,” Eastwood added.

Given the choice between Democratic presidential nominee Hillary Clinton and Trump in the November 8th election, the celebrated star of The Good, the Bad and the Ugly said, “That’s a tough one, isn’t it? I’d have to go for Trump. . . you know, ‘cause she’s declared that she’s gonna follow in Obama’s footsteps.”

In one of the most unusual speeches at a major US party convention, Eastwood four years ago addressed an empty chair used to symbolically represent president Barack Obama on stage at the Republican convention in Tampa, Florida, in a rambling denunciation.

Asked by Esquire what troubled him most, Eastwood referred to his chair speech.

“What troubles me. . . I guess when I did that silly thing at the Republican convention, talking to the chair,” Eastwood said.

In the interview, Eastwood made reference to the uproar in May that followed Trump’s comments accusing the judge overseeing a fraud lawsuit involving Trump University real-estate seminars of being biased against him because of Trump’s pledge to build a wall along the US-Mexican border to block illegal immigrants. US District Judge Gonzalo Curiel is an American of Mexican descent.

Eastwood told Esquire that Trump was portrayed as “a racist now because he’s talked about this judge.”

“And yeah, it’s a dumb thing to say. I mean, to predicate your opinion on the fact that the guy was born to Mexican parents or something,” Eastwood said. “He’s said a lot of dumb things. So have all of them. Both sides. But everybody - the press and everybody’s going, ‘Oh, well, that’s racist,’ and they’re making a big hoodoo out of it. Just f**king get over it. It’s a sad time in history.”

There were more than 100 tweets per minute about Eastwood on Twitter by Thursday afternoon. More than half of the tweets mentioning the Hollywood star were of negative sentiment, according to social media analytics firm Zoomph.

“Clint Eastwood was born in 1930. Let’s start a list of things that weren’t considered racist when he was growing up,” tweeted Sarah McBride, the national press secretary of the Human Rights Campaign gay rights group.

Others praised Eastwood, who rose to fame playing surly cowboys and cops. “Thank you Clint Eastwood. You’ve always been a personal hero. You said what needed to be said,” tweeted a person named Ruari.