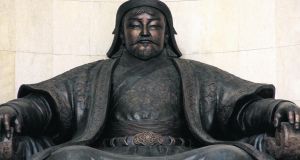 Three British tourists who were arrested in northern China have arrived back in the UK.

The tourists include Hoosain Jacobs (74) and his wife Tahira (68), from west London, who were among a tour group detained by officials during a seven-week trip to China.

The visit went “horribly wrong” when the group of 20 were arrested at Ordos airport, Inner Mongolia, on July 10th.

Of this group 11 people, including six British nationals, had already been deported before today.

It was originally thought members of the group might have been watching videos linked to propaganda or terrorism, but it has now emerged that they were watching a documentary on Mongol emperor Genghis Khan.

The Jacobs family spokesman said: “While the experience was distressing in the first instance, they say they were looked after at all times and treated well.

“The group is a mixture of multi-faith men and women from Islamic, Christian and Hindu religions who knew each other well and had travelled the world together in the past, including Israel and the US.

“Chinese officials arrested the group of 20 tourists on day 30 of the 47-day tour, a day after they visited the Genghis Khan mausoleum at Ordos, Inner Mongolia.

“The arrest took place at the airport in Ordos on July 10th, just before they were to board a plane to their next destination, namely Xian.

“The peace-loving group of people aged 33 to 74 believe only in love and the unity of the human spirit. [They] were on a private sightseeing tour in China to see the ancient and modern wonders, and learn and experience new cultures.”

The spokesman said nobody in the group was charged after they were detained.

The spokesman said: “It is believed the reason they were arrested was because of an unfortunate misunderstanding.

“They watched a BBC documentary video on Genghis Khan to further their understanding of the region they were in at the time, and this may have mistakenly been deemed as ‘propaganda’ material.

“It can only be assumed that junior officials who made the initial arrest in Inner Mongolia made a mistake, due to perhaps their unfamiliarity of the English language.

“The Jacobs family wish to thank the senior Chinese authorities in Beijing for the swift manner in which they have resolved this unfortunate misunderstanding.

“All members of the group are by their nature considerate and law-abiding citizens, with absolutely no criminal records whatsoever.

“The group have suffered an unfortunate and stressful ordeal, and would now like to recuperate and spend time with their loved ones.

“They wish to express their thanks to the media for respecting their privacy so that they may get back to living their normal lives.”

“All of the Brits have now landed and are safely home.”

South-African based charity Gift of the Givers said the 20 tourists - nine Britons, 10 South Africans and one Indian - were on a 47-day trip to explore ancient China.

A foreign office spokesman earlier said: “Our consular staff have visited the detainees and received assurances from the Chinese government about their health and treatment.”