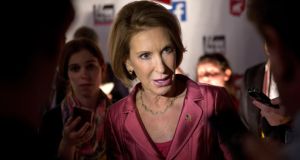 Carly Fiorina, former chairman and chief executive officer of Hewlett-Packard, who is the only woman seeking the Republican presidential nomination. Photograp: Andrew Harrer/Bloomberg

This week, Donald Trump said listening to Carly Fiorina, the only woman competing for the Republican presidential nomination, gave him “a massive headache”.

It was music to Fiorina’s ears. For months, the former Hewlett-Packard executive has tried to gain traction by attacking Hillary Rodham Clinton. But Fiorina’s candidacy did not start to sizzle until her performance at last week’s second-tier Republican debate, where viewers realised that as the sole woman in a 17-candidate field, she was singularly qualified to take on Trump.

It is not a role Fiorina necessarily wants to emphasise. “I don’t spend very much of my campaign time talking or thinking about Donald Trump,” she said on Wednesday. But it is one she has embraced with the same fervour she has employed against Clinton, the Democratic Party frontrunner.

“Women understood” that Trump’s attack on Fox News anchor Megyn Kelly, making a reference to bleeding that many people thought was an allusion to menstruation, was sexist, Fiorina told CNN. “I’ve had lots of men imply that I was unfit for decision-making because maybe I was having my period. So I’ll say it, okay?”

In a crowded Republican field, Fiorina delivered the most forceful denunciation of Trump’s comments, which sent a shudder through a party concerned it would reinforce perceptions that it is out of touch with female voters.

“People feel Carly has clearly demonstrated she is a very powerful operator, has a lot of strengths of conviction and is willing to take Hillary – and now even Trump – on very directly,” said Katie Packer Gage, a political strategist who focuses on helping Republicans connect with women.

Asked whether she was willing to play the role of telegenic poster girl of the Republican field, Fiorina said: “I know Hillary Clinton wants to paint the entire Republican Party with the broad brush of Donald Trump’s comments, but it’s not clear to me that Donald Trump is a Republican.”

Even Republicans who have embraced Fiorina in recent days – and expect her to earn a place in the top tier at the next debate on September 16th – privately concur she is an imperfect candidate. A single previous campaign, for the Senate from California in 2010, ended in defeat. Her corporate resumé is notable for her firing as chief executive of HP, a humiliation she explains as the price of bold leadership.

It is unclear how much her message will resonate with women. Fiorina once said her experience proved the glass ceiling was obsolete, and she has defined feminism as “a left-leaning political ideology” that pits “women against men” and is “used as a political weapon to win elections”.

In that interview, Fiorina said: “As a woman I am insulted when I hear somebody talk about ‘women’s issues’. Every issue is a women’s issue.”

Early in her candidacy Fiorina, whose corporate leadership style has been described as that of a “street bully”, proved eager to criticise Clinton, while others hesitated. Her gender provided a shield from what many Republicans assumed would be repercussions against a man attacking Clinton so early and often.

Fiorina said her campaign was seeing an “uptick” in donations, though she declined to give specifics. Early on, Fiorina decided to outsource much of the traditionally expensive work of campaigning, such as field organising, to a super Pac that has already raised $3 million to support her bid.

The campaign is bare bones, with no paid pollsters or senior strategists. Fiorina writes her own speeches, including the zingers against Clinton, which are repeated like bullet-points of a corporate PowerPoint presentation.

In Cleveland, she said Clinton “lies about Benghazi” and “lies about her emails”, two talking points she repeated in a testy post-debate exchange with MSNBC host Chris Matthews. “How many of you would like to see me debate Hillary Clinton?” she asked to roars of approval at a campaign stop in South Carolina on Sunday.

A spokeswoman for Clinton called Fiorina’s attacks on Clinton in the debate “particularly devoid of substance”.

The optimism among some Republicans that they have found their weapon against the war on women charge could be short-lived. A Democratic group supporting Clinton has already started to assemble research on her corporate career to portray Fiorina as a cold and ineffective titan.

“There will be a lot more scrutiny on her and she’s going to have to make her case in a bit more detail,” said Gage. – (New York Times service)