Breadth of talks between Obama and Xi ‘unique’

‘China and the United States must find a new path’ 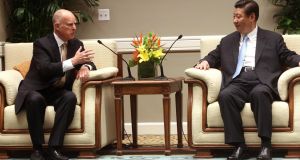 The breadth of the talks between US president Barack Obama and Chinese president Xi Jinping on Friday and Saturday in Palm Springs, and their timing, at the start of their second and first terms respectively, were “unique” in Sino-US meetings, according to Tom Donilon, Mr Obama’s outgoing national security adviser.

What is less clear is whether the summit will change the distrustful relationship between the counties.

“China and the United States must find a new path, one that is different from the inevitable confrontation and conflict between the major countries of the past,” Mr Xi said.

Mr Obama provided the “specifics” of what Mr Donilon called “cyber-enabled economic theft” by Chinese entities from the US government and private businesses. “The president underscored that resolving this issue is really key to the future of US-China economic relations,” Mr Donilon said.

Mr Obama stressed that cyber-theft was separate from the controversy on US domestic intelligence agencies allegedly hoovering up data from phone and internet companies.

Mr Donilon also highlighted what he called renewed co-operation between the US and China to prevent North Korea entrenching and expanding its nuclear programme.

The two sides also agreed to start military-to-military talks, something the US has long sought. – (Copyright The Financial Times Limited 2013)