'Our strongest areas are yet to happen' - Bernie Sanders believes his support will only grow after securing a suprise Democratic nomination win over Hillary Clinton in Michigan. Video: Reuters 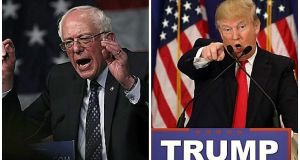 Democratic challenger Bernie Sanders scored a surprise win over frontrunner Hillary Clinton in Michigan while Donald Trump made further advances in the race to be the Republican presidential nominee in November’s election with convincing primary ballot victories in Michigan and Mississippi last night. Photographs: Reuters, EPA

Democratic challenger Bernie Sanders scored a surprise win over frontrunner Hillary Clinton in Michigan, the biggest contest on the third day of multi-state nominating contests in the US presidential race.

Billionaire businessman Donald Trump made further advances in the race to be the Republican presidential nominee in November’s election with convincing primary ballot victories in Michigan, Mississippi and Hawaii.

It was another night of headlines for the insurgent candidates in the Democratic and Republican races as Mr Trump’s juggernaut continued to power on and Mr Sanders showed that his campaign is far from over.

Mrs Clinton won Mississippi, her 12th state victory, comfortably by a near-70 point margin thanks to her strong, long-standing support among African-Americans and older, white voters in the American south.

But the story of the night was Mr Sanders’s stunning upset in Michigan where there were 130 nominee-picking delegates, the eighth largest state number, up for grabs.

Mr Sanders’s narrow win over the Democratic favourite will inject a fresh burst of energy into the socialist’s upstart campaign and slow Mrs Clinton’s momentum after her sweep of southern states.

The Vermont senator beat the former US secretary of state by 50 per cent to 48 per cent, confounding polls heading into the Michigan ballot that showed Mrs Clinton leading him by a 20- to 25-point margin.

Speaking at an impromptu news conference in Miami before all the votes were counted in Michigan, Mr Sanders said: “What tonight means is that the Bernie Sanders campaign, the people’s revolution that we are talking about is strong in every part of the country.

He described Tuesday as a “fantastic night” and said that the contests in his “strongest areas” are yet to happen, including on the west coast.

The result in Michigan caught even the Sanders camp by surprise, as the victory was called for the 74-year-old senator long after his supporters had left the large hall at his election-night party in Florida.

The northern state showed that Mr Sanders - whose crusade against Wall Street, politics as usual and economic inequality has found fans among white, blue-collar liberals - can broaden his voter base in a state with a more racially diverse people and in a big industrial, midwestern state.

Still, Mrs Clinton has a hefty advantage over Mr Sanders among the party delegates who will formally pick the nominee in July but the socialist’s win in Michigan improves his chances in upcoming contests in large delegate-rich states such as Illinois, Ohio and Pennsylvania.

The senator win’s in Michigan came on the back of a majority of voters being worried about the US economy and international trade deals taking American jobs overseas. Mr Sanders has consistently opposed trade deals, in contrast to Mrs Clinton. Michigan had lost many motor-industry jobs from manufacturing facilities moving out of the state and overseas.

An overwhelmingly majority of Michigan voters also found Mr Sanders to be more honest and trustworthy than Mrs Clinton.

The former first lady’s big wins in southern states has left Mr Sanders requiring three-fifths of the remaining delegates to break even with her, according to analysis by the independent Cook Political Report.

Michigan gives the Democratic primary a renewed competitive edge and the Sanders campaign a psychological boost in a key swing state that will likely prolong the race, as he hopes, to the Democratic national convention in July when the nominee will be officially picked.

Mr Trump’s wins delivered the reality TV star turned White House contender his 13th, 14th and 15th state victories of the Republican primary as he heads to state contests in Florida and Ohio next Tuesday which, if he wins, will likely make his surge to the nomination close to unstoppable.

“There’s only one person who did well tonight - Donald Trump,” Mr Trump bragged to reporters at an event at one of his Florida golf resorts.

The victory party was part-press conference, part-campaign rally and part-infomercial for the property developer’s business interests.

Still on the defensive after a stinging rebuke by former Republican nominee Mitt Romney, Mr Trump boasted about debt-free properties and his own-name merchandise such as Trump Wine, Trump Magazine and Trump Steaks, standing next to display samples of his consumer products.

“I can be more presidential than anybody… other than the great Abe Lincoln,” he said, defending his pugnacious manner in a nationalistic, anti-immigrant campaign that has alarmed the Republican establishment.

His victories - in a Rust Belt state in the industrial north and a conservative state in the deep south as well as in Hawaii - hand the billionaire a commanding lead over Texas senator Ted Cruz among pledged delegates who will ultimately choose the nominee at their party’s national convention in July.

Mr Cruz, confirming his status as the most viable anti-Trump challenger, won the Republican Idaho primary, where there are 32 delegates at stake, with almost half the votes counted late last night.

The victory gives the conservative firebrand his seventh state victory, strengthening his case that the Republican contest should be narrowed to a two-horse race to give him the best chance to beat Mr Trump.

Mr Trump stretched his lead over Ohio governor John Kasich and Florida senator Marco Rubio who will come under pressure to drop out of the race if they fail to score come-from-behind victories in their winner-take-all-delegates home-state primaries on March 15th.

Should they lose and are forced to suspend their campaigns, it would inevitably add to Mr Trump’s momentum towards the 1,237 delegates he needs to claim the Republican nomination.

Mr Kasich had been hoping to perform better in the industrial Michigan to raise his chances in neighbouring Ohio next week but Mr Trump again showed the broad appeal of his populist, anti-establishment candidacy among voters dissatisfied with career politicians.

The Ohio governor, with no state wins under his belt from any of the first 23 qualifying rounds, was locked in a hard fight for second place in Michigan with Mr Cruz with each holding about 24 per cent of the vote.

Mr Rubio, looking for momentum heading into his make-or-break test in Florida next week, scored so poorly in Michigan and Mississippi that he will likely fall below the threshold that would award him any delegates.

He has won just two contests, Republican ballots in Minnesota and Puerto Rico, leaving the establishment favourite with an uphill battle.