Berkeley: Students who died ‘have become children of Ireland’

Simon Carswell reports from the scene of the Berkeley vigil where locals and Irish gathered to remember the six Irish students who died when a balcony collapsed. Video/photographs: Reuters 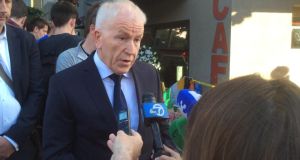 Mr Deenihan was accompanied by the parents of three of the students who died on Tuesday - Marie and Gerry Culligan, parents of Eoghan (21), Jim and Patricia Walsh, parents of Eimear (21), and Kenneth and Sinead Miller, parents of Lorcán (21). Photograph: Simon Carswell/The Irish Times

The six Irish students who died in the balcony collapse in California on Tuesday have “become the children of Ireland, ” Minister of State for the Diaspora Jimmy Deenihan said on a visit to the memorial in Berkeley.

Shortly after arriving in San Francisco, Mr Deenihan laid a wreath at the makeshift memorial of flowers and notes of condolences near the scene of the incident at the Library Gardens apartment block.

He was accompanied by the parents of three of the students who died on Tuesday - Marie and Gerry Culligan, parents of Eoghan (21), Jim and Patricia Walsh, parents of Eimear (21), and Kenneth and Sinead Miller, parents of Lorcán (21).

Mr Deenihan laid the wreath with Mr Walsh and Mr Culligan at the memorial just metres from where the six J-1 visa students fell from the fourth-floor balcony during a friend’s birthday party.

In emotional scenes surrounded by the parents and siblings, Mr Deenihan said that the families had been through “a very traumatic time for the last three days and the sympathy of Ireland is with you.”

“I have never seen such an outpouring of genuine sympathy and grief from the whole country for the families of the bereaved,” he said.

“The six who are dead have become the children of Ireland. They have now become symbols of our country and the people have responded accordingly in so many different ways.”

Speaking on behalf of the Government, the Taoiseach and the leaders of the political parties, Mr Deenihan expressed his sincere sympathy to the families of the dead and the seven injured and wished those who are in hospital a speedy recovery.

He said that their thoughts were also with the students who were in the company of those who died early on Tuesday morning.

“It is a traumatic time for them as well and they need our support as well at this time, and they will get that support,” he said.

Mr Deenihan praised the J-1 visa programme saying that 150,000 people had benefited from it over the years.

“The young people who are out here represent the new generation of Irish youth but also they represent the future leaders of our country and we want to see this programme continued and being as successful as it is at this point in time,” he said.

The Minister recognised Berkeley’s mayor Tom Bates, chief of police Michael Meehan and the fire department for their help in recent days, thanking them and the local authority for the support shown.

Mr Deenihan thanked the Irish community in the San Francisco Bay Area for their support as well as the Irish Pastoral Centre.

“It shows how Irish people really support each other in a time of need and this was a time of real need,” he said.

He paid tribute to the staff at the Department of Foreign Affairs, naming in particular the Irish consul general in San Francisco Philip Grant and his staff whose contribution has been “quite extraordinary” and recognised by the families of the students, he said.

Written on the cardboard placards were personal messages of love and sorrow at their passing. “Our dearest brother, son, friend, you made the world such a better place, You cannot believe how much you brightened up everyone’s lives,” said one message signed to Eoghan.

Today Mr Deenihan will later meet some of the seven students injured in the Tuesday’s accident along with their families at three hospitals in the Bay Area. He is also expected to meet the families of Ashley Donohoe (22) and Olivia Burke (21), the cousins who died in the accident.

The Donohoe and Burke families are in Rohnert Park, north of San Francisco, where Ashley’s parents, who emigrated from Ireland more than 25 years ago, are living. A joint funeral service for the cousins is being held tomorrow (Saturday) at a church in Cotati, which is a short distance from Rohnert Park where Ms Donohoe will be buried.

Mr Deenihan met with the families and the student friends of the deceased for 30 minutes at a City of Berkeley public safety department building that has served as a crisis centre since the tragedy.

The Minister told The Irish Times that he spent time with the different members of the families during the 11-hour flight from Ireland to San Francisco, speaking to them about the tragedy.

“That helped me to cope emotionally with arriving here and dealing with this matter, and I am an emotional person myself,” he said.

The Kerry TD said that he was good friends with the late Peg Keane Schuster, the grandmother of Niccolai Schuster and sister of Co Kerry playwright John B Keane. Mr Deenihan said that he met John Schuster, Nick’s father, recently and his brother Alexei.

“Really when you know some of the families personally as well it is more of a challenge,” he said.

Former president Mary Robinson on Friday said her “heart goes out” to the families of those killed and injured in the incident.

She told RTÉ Radio that what had transpired in Berkeley was “every parent’s nightmare”.

The Irish Immigration Pastoral Centre has made a public plea to passengers on the direct Aer Lingus flight from San Francisco to Dublin on Sunday to give up their seats to let friends of the deceased travel back to Ireland.

Mr Grant said that these seats were for the student friends of the deceased so they could return to Ireland in advance of the funerals.

He was unable to provide an update on the condition of the seven injured and declined to say whether the families had managed to see the remains of their loved ones yet.