Berkeley: ‘Our condolences go to the Irish people’ 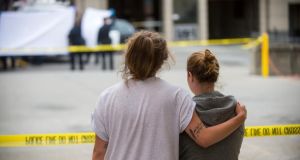 Two women embrace while watching sheriff’s deputies on duty at the scene in Berkeley where six Irish students were killed. They said hthey knew the victims. Photograph: AP Photo/Noah Berger

It was around midnight in California’s best-known college town when Berkeley police got the first call from Kittredge Street tenants and neighbours.

According to their police log, it was just a noise complaint about a student party at the 2110 Berkeley Library Gardens Apartments – not the first or last from the eight-year-old complex, where short-term renters pay up to $3,000 per month for one-bedroom apartments.

“But cops didn’t arrive till 12.40am, just after the balcony collapsed,” said local witness Bob Brown, who lives opposite the apartment. “The police were late this time.”

The six victims have been named as Niccolai Schuster (21), Eoghan Culligan (21), Eimear Walsh (21), Olivia Burke (21), Ashley Donohoe (22) and Lorcán Miller (21). They and others seriously injured, fell on to pavement concrete, not the asphalt of Kittredge Road.

lrish Consul in San Francisco Philip Grant went to Berkeley early in the day, talking to the building’s owners and establishing names of victims. His staff was already undergoing the usual summertime melee of lost passports and minor infractions. Now they’re facing the colossal bureaucratic and emotional toll.

Local people were dumbfounded at how so many managed to exit narrow French windows onto the cantilevered balcony. It doesn’t seem possible, they repeated.

From the ground, it looked small, and was immediately above another balcony. The pieces of the fourth floor balcony are now gone, leaving a ragged looking slash of wood and tarpaper being inspected by police detectives earlier yesterday morning.

“Statewide, we’re going to be examining balconies more closely from now on,” said a tenant from the opposite complex waiting outside the yellow police tape.

A second neighbour, David Daniels, said they’d “never known anything like this to happen in Berkeley”.

“Our condolences go out to the Irish people,” said Daniels, a 50-year-old Berkeleyian. Like his neighbour Bob Brown, he had watched at 5am as the ambulances and paramedics were moving the last of the injured and dead to local hospitals.

It’s just horrible, he went on, adding that it would make the city look twice at balconies ever after, and should prompt many inquiries into structural issues of number 2110 Kittredge.

Materials have been taken away for more analysis, and serious doubts have been cast on the integrity of building materials.

Daniels recounted how when he first moved to Kittredge Street a few years ago, a severe windstorm combined with a leak inside the roofing to result in an upper story window frame becoming loose and a casement dangling over the side.

He alerted the fire station and it was treated promptly. But the timbers under the stucco cladding are required by code to be kiln-dried and treated. It remains to be seen if they were. The City of Berkeley, the local authority here, said it had been taking “all necessary steps to safely secure the area” and investigate the incident.

It sent building inspectors to examine the scene early in the morning and have taken precautions.

“The balcony for the affected unit, as well as the three other similar balconies in the building, have each been red-tagged, prohibiting access to those areas,” it said.

“The City has ordered the property owner to immediately remove the failed balcony and to perform a structural assessment of the remaining balconies within 48 hours.”

Greystar, the property management company for the Library Gardens Apartments, said its heart went out to the families and friends of the deceased and those injured in the “tragic accident”.

“The safety of our residents is our highest priority and we will be working with an independent structural engineer and local authorities to determine the cause of the accident. We will share more details as we have them,” it said.

Throughout the day a host of friends and J-1ers came to the sidewalk of 2020 Kittredge to leave wreaths, messages and bouquets for the deceased and injured.

A block with the words City of Berkeley etched in it was draped in the bright blue flag of Dublin.