Berkeley deaths: wood joists on balcony appear to have failed 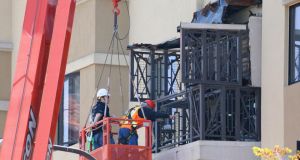 Six Irish students were killed after the fourth floor balcony of an apartment in Berkeley, California, collapsed.

The balcony became detached from the wall and collapsed into a balcony below of the pale stucco building on Kittredge Street, near the University of California Berkeley.

From a cursory review of early images of the balcony and without structural information in relation to their construction or the construction requirements within the US the following appears to be the case:

The balconies are lightweight cantilever design of a timber frame construction, with metal-framed balustrading, about four metres long and a metre wide.

The structural deck of the balcony comprises seven timber joists with a bituthene composite membrane which comprises a rubberised asphalt waterproof finish.

The perimeter of the balcony is finished with a through colour render system, all of which are lightweight products.

There do not appear to be any rainwater outlets designed into the construction to allow for removal of rain from the balcony.

All structural balconies are designed to take a maximum load which can be made up of fixed items, table, chairs or people – “live” loads. This is similar to lifts in which you see signs identifying the maximum loading capacity, for instance, eight-person, 630kg.

Typically, balconies serving a single unit would be designed for loads of 1.5kN/sq m which is about 62 stone or five people.

In Ireland, regulations require all structures to be designed according to their use; and in assessing whether a building complies with this “regard shall be had to the variable actions to which it is likely to be subjected in the ordinary course of its use for the purpose for which it is intended”.

Predominantly balconies in Ireland would be of concrete or steel construction. If they incorporate a timber deck they are usually supported by a steel frame.

From the photographs provided it appears that all timber joists have failed, allowing movement to occur within the balcony structure.

Closer views of the structural timbers in the images appear to show evidence of timber decay of the joists along with deterioration to the timber deck.

Timber decay and dry rot will occur within timbers with a moisture reading above 25 per cent and this can remain undetected behind finishes. Based on media reports it would appear the balcony might have been overloaded.