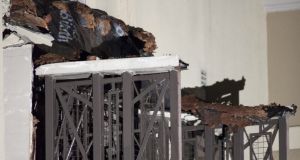 A view of the collapsed fourth-floor balcony at an apartment in Berkeley, California. The collapse led to the deaths of six students, five of them Irish, in June 2015. Photograph: Peter Da Silva/EPA 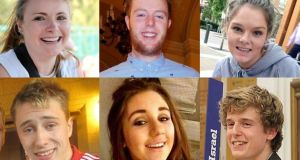 A number of Californian cities are being asked to examine buildings made by Segue Construction, the firm behind the apartment block in Berkeley, San Francisco where a balcony collapsed in 2015, killing six students.

California’s construction industry regulator moved to suspend or revoke Segue’s licence on Wednesday alleging it “wilfully departed from or disregarded building plans or specifications” and from “accepted trade standards for good and workmanlike construction”.

California state senator Jerry Hill - who has pushed through laws on construction oversight - has now begun contacting cities ensuring other developments produced by the company are safe.

Irish students Olivia Burke, Eoghan Culligan, Lorcán Miller, Nick Schuster and Eimear Walsh, all 21 years old, and Ms Burke’s cousin Ashley Donohoe (22), from California, died when the fourth-floor balcony they were standing on collapsed during a 21st birthday party in the early hours of June 16th, 2015.

Efforts are now underway to identify the number of other city developments linked to Segue to ensure building standards have been properly inspected.

Mr Hill’s office has contacted the city of Half Moon Bay and the County of San Mateo. The California League of Cities and the California State Association of Counties will also be asked to help identify other buildings.

“I am pleased that the Contractors State License Board made the accusations against Segue Construction,” Mr Hill told The Irish Times.

“It seemed obvious to all of us on the outside based on what we have seen and what we know on the history of the company but it’s encouraging to see that they are going after the contractor’s license.”

It is alleged that if the Berkeley balcony had been built as designed the weight of the 13 students would have been “well within” the limits. The regulator also alleges it was the decay of the joists that caused the balcony to collapse.

Mr Hill said he had attended the ribbon cutting last year on a residential development for senior citizens build by the same company and had now contacted city officials in its regard.

Together with fellow senator Loni Hancock, whose district includes Berkeley, Mr Hill authored legislation to push for stronger regulation of contractors which recently passed into law. It requires the disclosure of past crimes to state regulators within 90 days.

He said there is now a need, either through legislation or training, to ensure the actual standards of inspections themselves are robust.

“The [Berkeley ]tragedy hit the heart of everyone in the Bay Area and I know in California no one has not felt the pain of all of the families who lost loved-ones, because we could all picture ourselves being in that situation,” said Mr Hill.

“What we have taken from that, and moved forward [with ], is legislation and making change.”

In the aftermath of the Berkeley collapse, it was discovered Segue Construction had previously been involved in legal settlements totalling more than $26 million (€23 million). The company did not respond requests for comment.