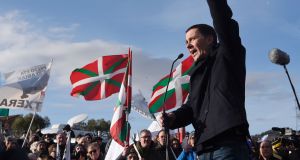 Basque leader Arnaldo Otegi speaks to supporters after being released from prison on Tuesday. “This is an historic day, we’ll definitely remember this day for years to come,” one supporter said. Photograph: Ander Gillenea/AFP/Getty Images

Arnaldo Otegi, a leading Basque separatist figure who has long been seen as a major influence on the terrorist group Eta, has been freed after six years in prison, giving the region’s independence movement a boost.

Mr Otegi (57) was jailed in October 2009 for attempting to re-establish Herri Batasuna, a political party which had been banned for its alleged links to Eta. However, he was instrumental in persuading Eta to end its campaign of violence and Basque nationalists claim he has been a political prisoner.

“They say that in Spain there are no political prisoners, but you just have to look at the number of cameras here to see that yes, they do exist,” said Mr Otegi moments after his release on Tuesday morning from prison in Logrono, in northern Spain.

Mr Otegi has been active in the Basque separatist left since the 1970s and has served several jail terms, starting in 1987, when he was imprisoned for taking part in an Eta kidnapping. Following his release he became involved in Herri Batasuna, which was seen as the political arm of Eta, and by the late 1990s he had become the party’s leader.

Although for many Spaniards Mr Otegi represents the terror of Eta, he is seen as a key figure in moving the Basque separatist left away from violence in its quest for an independent Basque state.

He was closely involved in a failed 2006 peace process involving the Socialist government of José Luis Rodríguez Zapatero and his influence was crucial in persuading Eta to declare a permanent ceasefire in 2011 after a four-decade campaign of violence.

In Mr Otegi’s hometown of Elgoibar there was a festive atmosphere as hundreds of supporters gathered on Tuesday evening to pay tribute to him.

“I’m very happy that’s he’s free,” said Inaki, a 66-year-old local man who did not give his surname, as he walked to the event. “He’s a natural leader. He’s an important person for the Basque people and it’s very important that he is free for the separatist left.”

Mr Otegi is now expected to return to the political front line and is likely to run for the post of Basque regional premier for the EH Bildu coalition in elections scheduled for this autumn, providing he can overcome legal barriers. His return to active politics is good news for EH Bildu, which lost ground to Podemos in the December general election.

“This is an historic day, we’ll definitely remember this day for years to come,” said Jon Benjamin Rábajo (21), who drove to Elgoibar from the city of Bilbao with some friends to see the nationalist leader.

“Arnaldo Otegi is the right person to lead the process [towards independence]. To lead that kind of process you need someone who knows how to sit down and talk to different people and I think Arnaldo Otegi is the only person out of all the political parties who can do that.”

Traditional Basque musicians and dancers performed in Elgoibar’s main square and there were loud pro-independence chants before Mr Otegi took the stage in front of an amplified image of his prison identification number. Speaking in Spanish and the Basque language, he thanked those who had supported him during his imprisonment and called for others jailed for Eta-linked crimes to be freed. He highlighted that independence was his priority.

“We promised peace and we brought it. Now we need to win,” he said.

Archbishop Desmond Tutu and Gerry Adams are among those who campaigned for his release. Other Irish figures who have joined the campaign include Nobel Prize winner Mairead Maguire and Harold Good, president of the Irish Methodist Church.

However, there are many who have opposed it. The AVT terrorism victims’ association tweeted: “Hurt and outrage on seeing how an Eta terrorist is received as a hero on his release.”