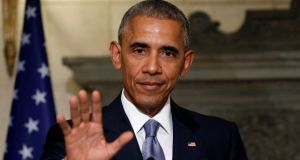 Outgoing US president Barack Obama: eight years on, he will pay a farewell visit to Berlin on Wednesday to meet a woman he calls his “closest ally”. Photograph: Kevin Lamarque

Eight years ago in Berlin, a skinny US senator got a rock-star welcome. It was June 2008 and Barack Obama’s victory in the US presidential election was still four months away but at the Siegessäule (or Victory Column), Berliners cheered him anyway, and his promise to end Bush-era unilateralism.

Eight years older, greyer and haggard beyond his years, Obama arrives for a farewell visit to Berlin on Wednesday to meet a woman he calls his “closest ally”.

On the special relationship with Washington, Theresa May, like her predecessors, may talk the talk. But in the last years, Angela Merkel has walked the walk: seeing Obama into – and out of – office.

With a similar, cerebral style, the two had a cool start, particularly after Merkel blocked Obama’s wish to speak before the Brandenburg Gate in 2008. It was five years before he was granted that honour in July 2013. In scorching, 40-degree heat, Obama delivered a prophetic warning on western complacency and how “intolerance breeds injustice”.

Berlin, Obama said then, was a symbol for everything that first went wrong and then went right in the 20th century.

After Donald Trump’s recent win, Obama’s last visit here as president will be a stark reminder of what has been lost.

Over the last week, Merkel has been channelling Obama’s thoughts from 2013, offering his successor a conditional co-operation on the basis of shared values of respect and tolerance. At an integration summit in Berlin on Monday, Merkel cited the first article of Germany’s post-war constitution: “Human dignity is inviolable.”

She added that respecting constitutional, fundamental values “is what makes it possible to live together in a society”.

Her underlying message to Trump: after trampling western values and denigrating women, Muslims, Mexicans and others to get elected, the reality television star is, in international circles, now the apprentice.

At a joint press conference on Wednesday afternoon, Obama will map out his close co-operation with Merkel over the years – on Syria, climate change, international terrorism – while praising how Germany has taken the lead on Ukraine, Russia and the refugee crisis.

Over dinner on Thursday they will gloss over their many tensions – from US frustration at Germany’s euro crisis strategy to Merkel’s fury at the National Security Agency spying on her mobile phone.

“Mr Obama comes to town with expectations that Berlin will do more to hold the threads together, particularly after Brexit,” says Almut Möller, Berlin head of the European Council on Foreign Relations. “Mr Obama’s visit is about showing that not everything will change overnight.”

Obama will calm his Nato partners’ nerves and pass on his impressions of his first meeting with the “pragmatic” president-elect. But he is likely to reheat old US warnings about European underspending on defence.

On his penultimate German visit last April, Obama warned that the world needs a strong and united Europe more than ever

What we don’t need, he added, was the world described by WB Yeats “where the best lack all conviction, and the worst are full of passionate intensity”.

Timely words from one US president as an increasingly divided Europe braces for his successor.

One year on: Coming from Wuhan is now a source of pride but many remain wary 10:30
Police ‘start detaining Navalny supporters’ ahead of Moscow rally 10:17
Covid-19: Hong Kong locks down thousands for compulsory testing 07:56
Trump impeachment trial set to loom over Biden’s first weeks in office 00:33
UK Covid-19 variant may be 30% more deadly, Boris Johnson says 20:16