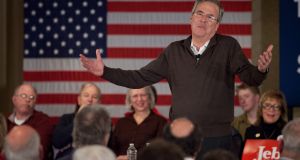 There’s an old saying in politics: the higher the tree the monkey climbs, the more you see of its private parts (and variations thereof).

The various apes ascending the US presidential tree have been revealing new and occasionally funny quirks about themselves on the campaign trail as they try – in some cases, desperately – to convince American voters that they should be their nominee.

CNN’s televised “town hall” meeting with Democratic candidates Hillary Clinton and Bernie Sanders allowed the presidential hopefuls to appear a little more human. Clinton gave a candid answer to a superb question (one of many on the night) from a rabbi about cultivating the ego required to be president while having the humility to recognise you don’t know everything.

The former first lady, speaking about her struggle between “ambition and humility” and “service and self-gratification”, admitted that she found campaigning tough. “This is hard for me,” she said, while noting that her husband Bill was “such a natural” at it.

“I never thought I would do this,” she said. “And so I have had to come to grips with how much more difficult it often is for me to talk about myself than to talk about what I want to do for other people,” she said. A scripture lesson lands in her email inbox every morning at 5am from a minister with whom she has a personal relationship, she said.

This time again Clinton is up against it in New Hampshire, which votes on Tuesday. Sanders, the Vermont senator, holds a hefty 20-point lead over her in the polls in the New England state.

The former secretary of state has avoided the mistakes of her last presidential campaign, presenting a warmer side by, for example, talking regularly about being a grandmother to Chelsea’s daughter Charlotte. “She calls me Grandma,” said Hillary, mimicking her granddaughter’s voice, during Wednesday’s town hall meeting.

Sanders even managed to show he had another speed aside from grouchy. Appearing awkward at times answering an unprepared personal question, he said that he drives a small Chevrolet: “one of the smallest Chevys that they make . . . five years old . . . a red car . . . pretty good on mileage.” He also spoke about an album of folk classics he recorded in 1987 when he was mayor of Burlington in Vermont he recorded an album of folk classics: “If you’re looking at a president who can carry a tune, I’m not the guy,” he said.

On the Republican side, candidates too revealed aspects of their personal lives in the campaign. The highly scripted Marco Rubio, the Florida senator, tells the story of his family’s immigrant background and economic struggles as part of a well-rehearsed stump speech.

Christie, although languishing in the polls, is one of the more natural performers on the trail, answering questions with humour and relating voters’ experiences to those of his own.

Asked by one working mother about the Republican Party’s policies towards women in Iowa last week, Christie said that for each year of their almost 30 years of marriage, his wife had out-earned him working “on Wall Street in a man’s world”. The New Jersey man said in the beginning his friends asked, did it “assault your manhood”. His response: “I have got three words for you: joint checking account.”

For others, dropping the guard has exposed the sad reality of lacklustre campaigns. The most exciting part of Jeb Bush’s candidacy is the exclamation mark at the end of his name in his “Jeb!” posters.

Delivering his stock blustering riff about defending the country as commander-in-chief, Bush told an audience in New Hampshire on Tuesday: “I won’t be out there blowharding, talking a big game without backing it up.” He was met with deadly silence, his audience unimpressed. “Please clap,” he said, shoulders slouching, defeated.

The audience laughed, then clapped, charitably.