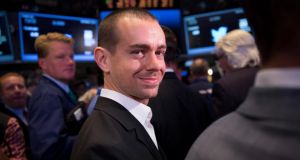 Twitter and police are investigating alleged threats made by Islamic State militants against the social media network’s co-founder and other employees.

Islamic State supporters, in online posts on Sunday, called for attacks against Twitter and its “interests,” including death threats, according to the online news media company Buzzfeed as well as the NBC news network.

“Our security team is investigating the veracity of these threats with relevant law enforcement officials,” a representative for Twitter said in a statement on Monday.

The messages were reportedly posted on an anonymous file-sharing website called Pastebin.

“Your virtual war on us will cause a real war on you,” one post by Islamic State supporters said, according to Buzzfeed. “We told you from the beginning it’s not your war, but you didn’t get it and kept closing our accounts on Twitter, but we always come back.”

Islamic State militants have relied heavily on Twitter and other social media networks to coordinate and to communicate, including the publishing of shocking videos of beheadings and other violent acts against its enemies.

Twitter’s user policy prohibits the use of the service for violence and threats, stating on its website: “You may not publish or post direct, specific threats of violence against others.”

The company does not, however, “proactively monitor content,” a spokesperson for the network told Reuters last week, adding that such policies were in place for other similar companies.

Twitter’s platform, which allows people to post 140-character messages with pictures and brief video clips, has more than 288 million users across the world, the company says.