Accusatory theatrics cannot mask how US administration failed in Benghazi

In this hottest of hot spots, the state department’s minimum security requirements were not met 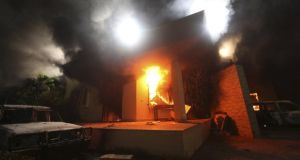 The US consulate in Benghazi after the attack on September 11th, 2012, in which ambassador Chris Steven was killed. Photograph: Esam Al-Fetori/Reuters

The conservatives appearing on Benghazi-obsessed Fox News are a damage patrol with an approach that goes like this: “Lies, paranoia, subpoena, impeach, Watergate, Iran-contra.”

(Though now that the Internal Revenue Service has confessed to targeting Tea Party groups, maybe some of the paranoia is justified.)

Welcome to a glorious spring weekend of accusation and obfuscation as Hillaryland goes up against Foxworld.

The toxic theatrics, including Karl Rove’s first attack ad against Hillary, cloud a simple truth: the administration’s behaviour before and during the attack in Benghazi, in which four Americans died, was unworthy of the greatest power on Earth.

After his Libyan intervention, President Barack Obama knew he was sending diplomats and their protectors into a country that was no longer a country, a land rife with fighters affiliated with al-Qaeda.


Security shortfall
Yet in this hottest of hot spots, the state department’s minimum security requirements were not met, requests for more security were rejected, and contingency plans were not drawn up, despite the portentous date of 9/11 and cascading warnings from the CIA, which had more personnel in Benghazi than the state did and vetted the feckless Libyan Praetorian Guard. When the Pentagon called an elite special forces team three hours into the attack, it was off training in Croatia.

Hillary Clinton and ambassador Chris Stevens were rushing to make the flimsy Benghazi post permanent as a sign of good faith with Libyans, even as it sat ringed by enemies. The hierarchies at state and defence had a plodding response, failing to make any superhuman effort as the siege waxed and waned over eight hours.

In an emotional Senate hearing on Wednesday, Stevens’s second-in-command, Gregory Hicks, who was frantically trying to help from 600 miles away in Tripoli, described how his pleas were denied by military brass, who said they could not scramble aircraft and who gave a “stand-down” order to four special forces officers in Tripoli who were eager to race to Benghazi.

“My reaction was that, okay, we’re on our own,” Hicks said quietly. He said the commander of that special forces team told him, “This is the first time in my career that a diplomat has more” chutzpah “than someone in the military”.

The defence secretary at the time, Leon Panetta, insisted, “We quickly responded.”

But they responded that they would not respond.

As Emma Roller and David Weigel wrote in Slate : “The die was cast long before the attack, by the weak security at the consulate, and commanders may have decided to cut their losses rather than risking more casualties. And that isn’t a story anyone prefers to tell.”

Truth is the first casualty here when competing fiefs protect their mythologies. Some unhinged ideologues on the right cling to the mythology that Barry and Hillary are out to destroy America.


Terror vanquished
In the midst of a re-election campaign, Obama aides wanted to promote the mythology that the president who killed Osama was vanquishing terror. So they deemed it problematic to mention possible al-Qaeda involvement in the Benghazi attack.

Looking ahead to 2016, Hillaryland needed to shore up the mythology that Clinton was a stellar secretary of state. Prepared talking points about the attack included mentions of al-Qaeda and Ansar al-Sharia, a Libyan militant group, but the state department got those references struck.

Foggy Bottom’s spokeswoman, Victoria Nuland, a former Cheney aide, quashed a we-told-you-so paragraph written by the CIA that said the spy agency had “produced numerous pieces on the threat of extremists linked to al-Qaeda in Benghazi and eastern Libya” and had warned about five other attacks.

Nuland fretted about “my building leadership” and, with backing from Ben Rhodes, a top White House aide, lobbied to remove those reminders from the talking points because they “could be abused by members” of Congress “to beat up the state department for not paying attention to warnings, so why would we want to feed that either?”

Hicks said that Beth Jones, an undersecretary of state, bristled when he asked ask her why Susan Rice had stressed the protest over an anti-Muslim video rather than a premeditated attack– a Sunday show marathon that he said made his jaw drop. He believes he was demoted because he spoke up.


Life or death
All the factions wove their own mythologies at the expense of our deepest national mythology: that if there is anything, no matter how unlikely or difficult, that we can do to try to save the lives of Americans who have volunteered for dangerous assignments, we must do it. – ( New York Times )