A third of 8,000 Irish J-1 students head for California 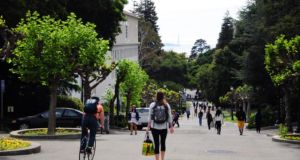 A file image of students on the University of California, Berkeley, campus in San Francisco, California. Photograph: Getty

Over 8,000 Irish students go to the US each summer on J-1 visas, predominantly after their first year in college year or in advance of their final year exams.

According to the Department of Foreign Affairs, 35 per cent of J-1 students - or over 2,800 annually - travel to California, with San Francisco a particular draw for summer jobs in shops, bars and restaurants.

To qualify for a J-1, you must be a full-time academic studying for a degree or higher qualification, and be able to show you intend to return to Ireland at the end of the four-month visa programme.

Student campus accommodation is often sought out by J-1 students as it tends to be cheaper, while also providing amenities and a social network.

University of California Berkeley, located 20kms across the bay from San Francisco, is one of a number of colleges which offer visiting student accommodation through a subletting service.

The university also has strong academic links with Ireland. It is named after the Co Kilkenny-born philosopher and former Church of Ireland Bishop of Cloyne George Berkeley.

A Celtic studies centre has operated there since 1911, and it usually attracts a small number of Irish postgraduate and scholarship students each year as part of a very international mix on campus.

Broadcaster and history Myles Dungan and Irish-language poet Louis de Paor are among a number of Fulbright Scholars to have studied in Berkeley in recent years.

Speaking about the importance of the J-1 programme earlier this year, US Ambassador Kevin O’Malley said more than 150,000 Irish people had participated in the scheme over the past 50 years and the net result was a group of influential members of Irish society who all had a strong connection to America.

“The J-1 visa program is the ‘secret sauce’ in the strong US-Irish relationship. As the US Ambassador, I am often told that the Irish ‘get’ Americans.

“I am convinced that this massive J-1 program is an underappreciated factor, for example, in the massive US-Irish business relationship which is so positive and successful,” said Mr O’Malley.

“Ireland, despite its size, sends more students to the United States each year on J-1’s than any other country in the world. 8,000 students participated last year alone. An exchange on that scale just has to have an impact.”