A far cry from the Smiddy days of Irish diplomacy 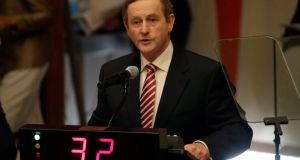 This week’s visit was Enda Kenny’s third to the United States this year, and he is due back in New York in November for a business dinner. Photograph: Peter Foley/EPA

Taoiseach Enda Kenny wrapped up a speech to a group of Irish millennial emigrants at a reception in New York City on Tuesday night, telling them that he was heading off to meet President Barack Obama and his “good wife” who are “doing a reception down the town here”.

The very Irish way Kenny casually dropped the name drew laughs. He told them to keep in touch with Ireland via “the Facebook and Skype”, and later worked the room, pressing the flesh and stopping for “selfies”.

The Obama reception he referred to was a party at the Waldorf-Astoria Hotel for leaders attending the United Nations general assembly. This was Kenny’s third visit to the United States this year. He’s due back in New York again in November for a business dinner.

Including his trips, there have been 14 visits by the Taoiseach or Cabinet Ministers to the US this year. Add the Attorney General and junior ministers, it rises to 17. During the rest of the year, there will be at least four more such visits planned. So clearly, to state the obvious, the US is important to Ireland.

All these visits and the fact the Irish can still command access to the Oval Office around St Patrick’s Day is testament to the strength of the relationship, despite the occasional digs thrown by US politicians, including recently the president, at the use of Ireland for tax avoidance by multinationals.

Ireland’s economic recovery dominates the agenda for Irish ambassador Anne Anderson, the 17th envoy to the US and the first woman. The legal status of Irish immigrants and the Northern Ireland peace process follow closely.

Things were very different 90 years ago. In March 1922 Michael Collins sent his close friend, Cork-born Timothy Smiddy, a professor of economics at University College Cork, as the envoy and fiscal agent of Dáil Éireann to the US. Smiddy had been Collins’s economic adviser on the Anglo-Irish treaty delegation team in London in 1921.

With his appointment to the US, he became not just Ireland’s first overseas ambassador, though his initial title was “Envoy Extraordinary”, but the first diplomatic representative of a Commonwealth country.

Canada had won the right to appoint a representative in Washington but had not done so, making Smiddy the first when in 1924 he became “Minister Plenipotentiary” (how ambassadors from small countries were described before the second World War), according to Dr Gerard Keown, the Irish diplomat, historian and writer.

His appointment was not recognised by the US State Department until 1924 as it was not approved by the British government.

Smiddy’s role was largely more a propagandist than diplomat, as Texas-based history professor Troy Davis has written extensively on. He was sent to promote the interests of the Free State, demonstrating the country’s independence from the UK. This largely involved countering the publicity efforts of the anti-treaty camp in the US.

He watched Labour leader Jim Larkin in the US, stressing his ties to Irish-American communists and even reported that they were allegedly plotting to assassinate the British ambassador and Smiddy himself. He rarely minced his words in dispatches back to Dublin.

The Royal Irish Academy’s Dictionary of Irish Biography carries a cryptic yet curious line on Smiddy’s entry: “As Irish minister he had to incur repeated hostility from some quarters of Irish America, who attempted to bring into the public domain aspects of his private life.”

This must refer to Smiddy’s son Sarsfield who, at 21, was charged with smuggling Canadian whiskey into Montana in April 1927 during Prohibition. The day after his arrest, the headline in the local Helena Independent newspaper read: “Son of Diplomat is a Rum Runner.”

“Some Irish Americans didn’t like Smiddy because they thought he was too congenial towards the British, and they tried to use that incident as ammunition against him,” Prof Davis told me.

Smiddy’s stint was a baptism of fire for Ireland’s representatives in the US and rarely diplomatic.