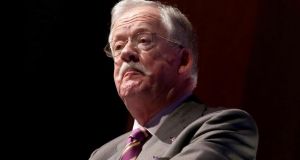 Ukip candidate in the Newark byelection Roger Helmer: sticking by his view that there has been “no global warming for 17 years and nine months; that is a long time without global warming”. Photograph: Matt Cardy/Getty Images

Newark suffered three sieges during the English civil war because two roads, vitally important both to the Royalists and the Parliamentarians, ran through the Nottinghamshire town. In consequence, Newark suffered starvation – the townspeople resorted to eating dogs by the end of the third siege – and plague, but stayed loyal to Charles I until he ordered its surrender.

Next Thursday, Newark once more marks a crossroads, when voters will decide a byelection that could have profound implications for British politics. On Saturday, Ukip’s leader, Nigel Farage, stood at a platform in Kelham Hall outside Newark before 700 party supporters and locals who had come along to see him at close quarters.

Some of Farage’s lines were tried and tested: Ukip had been told again and again that they were nothing more than a protest vote, he told his audience.

“Well, it is looking to me like a permanent protest vote,” he said. “If the European Parliament elections were an earthquake, then the Newark byelection could be Britain’s Krakatoa moment.”

In the Market Square on Saturday, MP James Clappison had the slightly weary look of a man who has seen Newark too often: “This is my sixth time here,” he told The Irish Times. Earlier. Foreign secretary William Hague had strolled through, while home secretary Theresa May and a succession of other Conservative ministers have done duty, too.

During an earlier visit to Newark last week, Hague, a former Conservative leader, was amused facing questions that implied Ukip’s Europe success can be replicated in House of Commons battles. “I managed, the Conservatives managed, to get the protest vote in 1999 when we won a huge victory in the European elections. It did me absolutely no good whatsoever,” he said, dryly.

However, Newark must be held by the Conservatives, though they accept that the 16,000 majority is a relic of the past in the face of a determined bid by Ukip. Last week, a poll of 600 locals – just when many were ticking their postal votes – suggested that the Conservatives could end up just 2,000 votes ahead of Ukip’s candidate, East Midlands MEP Roger Helmer.

Despite Mercer’s easy-to-predict fall, Ukip came late to Newark, selecting Helmer only after Farage ruled out running in the constituency. However, it did win over half of the votes in the European Parliament elections in the town – which is the single most populous part of the constituency. On Saturday, people milled about the party’s office on Bridge Street, while a few locals easily engaged with canvassers on the street outside.

In his early 70s, Helmer has some baggage – a past description of homosexuals as “abnormal”, for one, though he now says both the world and he have moved on since he made the remark.

Taking questions submitted earlier, Helmer stuck by his climate change views: there has been “no global warming for 17 years and nine months, that is a long time without global warming”. The biggest influence on global temperatures is the sun, not mankind’s CO2 emissions, he went on, saying that the EU is driving out industry and jobs because of its actions.

In the days since the European and local elections, the Conservatives, Labour and Liberal Democrats have struggled to know how to cope with the fact that five million people voted for Ukip. In the past, Ian Harrison, a local government official who went to Kelham Hall “to see for himself”, has voted for both Labour and the Conservatives. He does not need every question answered before Thursday, but their policies will have “to be substantial and believable” in time for next May’s general election.

“I want to find out for myself what Ukip’s policies are,” he told The Irish Times, “though what I have seen has given me some reassurance that they are not extremists.”