Just 600 votes kept Ukip out of a seat in Heywood 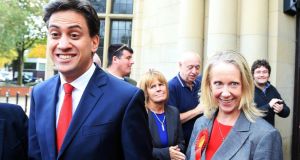 Heywood is a relatively undistinguished district on the outskirts of Rochdale, but, in its time, it has made its mark on the political landscape of Britain.

The Church of St Leonard is home to Britain’s oldest war memorial, a stained-glass commemoration of local archers who helped defeat the Scots at Flodden Field in 1513.

A hundred years later, a local magistrate, Peter Heywood, led the men who arrested Guy Fawkes as he prepared to ignite gunpowder beneath the Houses of Parliament.

In yesterday’s early hours, Heywood produced a tremor, when the UK Independence Party’s John Bickley came within 600 votes of Labour’s Liz McInnes in the Heywood and Middleton byelection. Caused by the death of MP Jim Dobbin, Labour had called the election on the same day as one in Clacton-on-Sea in Essex, forced by Douglas Carswell’s defection from the Conservatives to Ukip.

In so doing, Labour was attempting to split Ukip’s forces.

Early on Thursday, however, the Labour group gathered in the Heywood Sports Village count centre began to look progressively more drawn as ballot boxes were opened.

Shortly before 2am, Labour’s Liz McInnes took to the rostrum to accept victory, by just 600 votes. Locals, she said, “had given their backing to Ed Miliband”. She was interrupted by guffaws, led by a boisterous Ukip crowd, but the laughter was shared by many others there with or without party allegiances.

Such moments are telling illustrations of the popular mood: the result in Heywood is many things, but a vindication of Miliband it most certainly is not.

The Conservatives had a terrible night in Clacton-on-Sea. Carswell took 60 per cent of the votes, many on the back of his own popularity, but many can be attributed to Ukip’s anti-Westminster rhetoric.

Carswell did not face a Ukip challenge in the 2010 general election since he was then seen by the Eurosceptic party as one of their own, as he was later to confirm. Nevertheless, the vote is extraordinary. The question now is whether Mark Reckless, who recently resigned his Rochester and Strood seat after he defected from the Conservatives, can repeat it.

If he does the final months of the parliament’s life will be marked by other byelections as other Ukip-leaning Conservatives jump ship.

However, the double or quits gamble applies to Ukip, too, since a Rochester defeat for Ukip would be presented as evidence that the wind was coming out of the sails of the party leader, Nigel Farage.

Immigration is a key issue, though just 3 per cent of Clacton’s population is foreign-born, and the number in Heywood is only a little higher. But it is not the only issue.

If immigration was the only factor, London would be one of Ukip’s heartlands, but it is not. Some 7 per cent of Slough’s population arrived from eastern Europe in the last decade. However, that has not translated into success for Ukip in the Berkshire town, where it managed to get just one councillor elected in 2014 out of 42 seats.

The lessons for next May’s general election are all that matters now. Ukip will win seats – a half-dozen is possible, maybe more. On the back of a miserable 36 per cent turnout in Heywood, Labour actually took a greater share of the vote than it did in 2010, but that hides the reality of what happened there.

Much of its traditional bedrock support abandoned it, though it was replaced by those who have supported the Liberal Democrats, or the Conservatives in the past.

Today, Labour draws hope from that, believing that a swathe of seats in England’s north can be thus protected from a Ukip surge. It says much about Labour that some people are thinking like that.

Behind the scenes, the party is in tumult. Few, if any, of its MPs have confidence in Miliband. Some, such as Andy Burnham, are positioning to replace him after a defeat next year.

Others younger than Burnham, and more who were part of Tony Blair’s youth wing, such Chuka Umunna, are manoeuvring to ensure that they emerge unblemished.

Miliband now faces choices. Blamed by those who are concerned about the flow of eastern European immigration after 2004, Labour has little credibility on the issue. However, he could seek to toughen up his language.

Eight months from May, there is an increasing prospect that neither Labour nor the Conservatives will be able to form a majority.

The latter hope they can hold 35 of their 56 seats, while the Scottish National Party is targeting more than 30 Labour-held seats north of the border. If current trends hold, the UK could be on the brink of the multi-party coalition age, or a period of unstable minority governments.