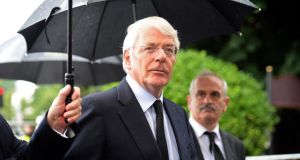 Former British prime minister John Major has warned that a minority Labour government will be held “to ransom on a vote by vote basis” by the Scottish National Party. Photograph: Eric Luke / The Irish Times.

Former British prime minister John Major has warned that a minority Labour government will be held “to ransom on a vote by vote basis” by the Scottish National Party.

Mr Major has become the latest Conservative to claim that the influence of the Scottish nationalists threatens chaos after the May 7th election, if the SNP succeeds in destroying much of Scottish Labour.

Some leading Conservatives, privately and publicly, already worry that the Conservatives’ strategy could threaten the future existence of the United Kingdom by inflaming relations between the English and Scots.

However, prime minister David Cameron believes that key groups of older voters in English battleground constituencies can be frightened off voting Labour by fear of post-election instability.

In a speech in the West Midlands, Mr Major, who won a surprise election victory in 1992, warned that everyone in the UK would end up paying higher taxes, having more debt and fewer jobs opportunities were the SNP in such a position.

Pointing to Scottish Labour leader Jim Murphy’s pledge to spend money from a tax on £2 million homes - most of which are in London, Mr Major said: “If a Labour leader asks for that, how much more will the SNP demand?

“And if this is the way Labour intends to behave towards England - how can they say ‘No’ to the SNP? And if Labour did say ‘No’, the SNP could withdraw support and bring down the government at any time,” he added.

Warning that this “is a recipe for mayhem”, Mr Major said the UK would have “a weak and unstable” government “pushed to the Left by its allies, and open to a daily dose of political blackmail” just when it needed strong government.

However, there are doubts within the Conservatives, too. Former Scottish secretary, Michael Forsyth said the concentration upon the SNP will boost the nationalists and threaten “the integrity of the Union”.

Former Margaret Thatcher loyalist Norman Tebbit expressed puzzlement about the Conservatives’ strategy, saying that it seemed “pointless to just irritate Scots by shouting at them from Westminster”, just as many English voters had been “irritated into voting for Ukip”.

“I just cannot read Mr Cameron’s mind, it’s a foreign country to me,”

said Mr Tebbit, who served in a succession of Mrs Thatcher’s cabinets, but who has frequently criticised Mr Cameron’s leadership.

Privately, Conservatives around Mr Cameron believe that the more seats the SNP win in Scotland the less likely Ed Miliband will have the numbers to form even a minority Commons administration.

Reacting, SNP leader and Scottish first minister Nicola Sturgeon said Scots have a right to make their voices heard in Westminster. “John Major’s comments are silly, over the top and frankly they don’t show him in a particularly good light.

“These are the same politicians that during the referendum campaign urged Scotland to lead the UK not leave the UK. Now they appear to say Scotland’s voice should only be heard if we say the things they want us to say and vote the way they want us to vote,” she said.

“My message to John Major is Scotland’s voice deserves to be heard in whatever way the Scottish people choose, and voting SNP means Scotland’s voice will be heard more loudly and strongly at Westminster than it has ever been heard before.

“But it will also be a voice for better and more progressive politics at Westminster, so perhaps it’s not surprising that John Major doesn’t like that. But what he is saying disrespects democracy, it’s up to people in Scotland to vote how they choose to vote and make their voice heard,” she said.

The Conservatives’ targeting of the SNP displays “panic and desperation”, Ms Sturgeon said. “I can understand why that message of standing up for ordinary people not just in Scotland but across the UK might offend John Major as an ex-Tory prime minister, but I think it’s a message that will continue to win support right across Scotland.”