Tony Blair interview: ‘Boris Johnson is no fool, he will face the facts on Brexit’ 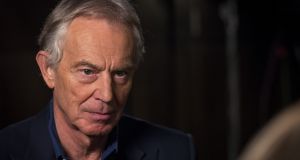 Former UK prime minister Tony Blair: ‘I don’t believe Boris Johnson will ever do no-deal without an endorsement either from parliament or the people.’ Photograph: David Paul Morris/Bloomberg

Boris Johnson campaigned for the Conservative Party leadership promising a sharp change of course as well as style from Theresa May, especially on Brexit. But Tony Blair believes that Johnson has made the same mistake as May in making political commitments before establishing if they could be realised.

Perhaps three dozen Conservative MPs are ready to join a parliamentary effort to block a no-deal Brexit, led by a parade of ministers set to resign even before Johnson moves into Downing Street. Dover MP Charlie Elphicke lost the Conservative whip on Monday after he was charged on three counts of sexual assault and the party faces the likely loss of a byelection in Brecon and Radnorshire next month that would almost eliminate its working majority.

Blair believes that even a non-binding motion in parliament rejecting a no-deal Brexit would persuade Johnson that it was not worth the risk without a popular mandate.

“The first thing that is going to land on his desk when he comes into office is a paper from the civil service saying a. you will not negotiate the deletion of the backstop, and b. no deal is a huge risk. I mean they’re going to say both of those things. If only just to protect themselves, they’re going to talk of those things,” he said.

“I think because he’s not a fool, he will face the facts and decide that if you try and engineer no deal without parliament against parliament’s wishes and without public endorsement, you know you better hope it works perfectly because if it doesn’t you’re going to be in all sorts of difficulty for the rest of your time in politics.”

Johnson’s position on the backstop hardened during the leadership campaign and last week he said even a time limit or a unilateral exit clause would not be enough to make it acceptable. Moving between now and the end of October from such a hardline position to a negotiable demand on changes to the backstop would be difficult.

“If I’d been him, I would have left some room for manoeuvre but he’s been very explicit and repeated it continually that the backstop will be deleted,” Blair said.

Blair, who favours a second referendum, remains convinced that Britain will change its mind about leaving the EU. He blames Brexit on a British form of populism he argues is “not smart”, unlike that of Donald Trump. He describes Trump’s populism as being more about language than policies, most of which are close to traditional Republican positions.

“So the populism is in one sense quite smart, the Trump populism, because it in the end it’s about pushing language. Of course, words can have their effect but it’s not the same as what we’ve done which is not smart populism. Because we’ve translated our populist sentiment into a life-changing policy. It’s worse in its impact because it’s focused on a policy and the policy is Brexit,” he said.

In a paper published on Monday by Policy Exchange, former Northern Ireland first minister David Trimble claims that the backstop would wreck the Belfast Agreement because it would impose North-South co-operation top down rather than allowing it to develop from the bottom up. Historian Paul Bew has advanced a similar argument but Blair is dismissive.

“I think that’s an overcomplicated argument about something that’s really very simple. The Border has been open and now it’s going to have checks. The Border’s been without friction and now it’s going to have friction. You can argue the philosophical reasons around that but it’s just as simple as that. Northern Ireland and the Republic have been in the same relationship to Europe in the last 100 years and now they’re going to be in a different one,” he said.

“You could say we’re just going to put up with the backstop because you could say we’ll find ways around the backstop in times to come. The weird thing about the Eurosceptics is they’re arguing at one and the same time that the backstop is fundamental and has to be removed and also that it is obviously going to be got around. So in the end if it’s so easy to find a way round it and people of goodwill will find it, then why are you worried about the backstop?”

Johnson’s champions predict that he will defy expectations by succeeding as a prime minister who is more chairman than chief and delegates widely to a brilliant team. Blair agrees that some leaders can be effective if they set a clear vision for government and allow others to implement it.

“Because otherwise the risks are just too great for him politically, let alone the country. And so in one sense, yes it’s true, you have a thousand different issues as prime minister to deal with. But in the short term, he’s got one issue to deal with and that issue in the end is a choice. I don’t think there are new facts that are suddenly going to be put on the table around it. It’s a choice you’ve got to make and in the end he’ll have to make it.”