The Question: Can a queen express opinions?

Queen Elizabeth was overheard saying Chinese officials were hard to deal with when President Xi Jinping visited the UK. It seems unfair to expect her to have no opinions 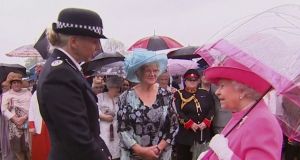 Queen Elizabeth got into an uncharacteristic spot of diplomatic bother this week. The normally tight-lipped monarch was attending a typically British royal garden party at Buckingham Palace on Tuesday – typically British in that the event was held in a downpour.

The rain was the least of her problems, however: afterwards it transpired that footage of the event included an exchange with Lucy D’Orsi, a Metropolitan Police commander.

On hearing that D’Orsi had overseen security during the visit to the UK of President Xi Jinping of China last October, the queen, protected under an umbrella that also acted as an amplifying cone, offered a consoling, “Oh, bad luck”.

Why bad luck? Because, according to the monarch, Xi’s contingent were a particularly difficult bunch to deal with.

There was extreme displeasure in Beijing at the exchange – and considerable coverage of the faux pa in the British press.

But why did this cause such a fuss? Is the monarch obliged to be anodyne in thought and speech? Perhaps, without jumping to cultural stereotypes, there was a culture clash between the rigorously traditional British royal apparatus and the mandarins of the Chinese delegation. And why shouldn’t she comment on it?

It is understandably desirable that the queen not shoot her mouth off about every issue or foreign leader, but she can’t be expected to have no opinions whatsoever.

The notion that certain positions need to be above politics is slightly naive: our heads of state are people, not automatons. And in a week in which our own first lady, Sabina Higgins, was criticised for her remarks on abortion rights, that principle extends beyond royalty.