Thatcher was figure of hate for many Britons 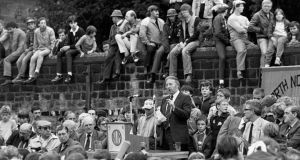 Miners leader Arthur Scargill, president of the NUM, addressing a rally in Barnsley in 1984.

Davey Hopper, a proud, outspoken retired miner, who worked at the Wearmouth Colliery on which now stands Sunderland's FC's Stadium of Light, was 70 yesterday. The death of Margaret Thatcher meant 'it looks like one of the best birthdays I have ever had'.

Nearly 30 years on from the National Union of Mineworkers' 1984 strike, the hatred felt by many in the North-East of England, in Yorkshire and in the Welsh mining villages towards their Conservative nemesis remains visceral.

"There's no sympathy from me for what she did to our community. She destroyed our community, our villages and our people," Hopper said, "For the union this could not come soon enough and I'm pleased that I have outlived her.

"It's a great day for all the miners, I imagine we will have a counter demonstration when they have her funeral," he went on, "Our children have got no jobs and the community is full of problems. There's no work and no money and it's very sad the legacy she has left behind."

"She absolutely hated working people. I've got very bitter memories of what she did. She turned all the nation against us. I would say to those people who want to mourn her that they're lucky she did not treat them like she treated us."

The outpouring of anger towards the dead made many uncomfortable, while senior Labour leaders came out quickly to set a tone amongst their followers - 'powerful conviction politician, but one with whom we disagreed' - lest others adopt a more bloodcurdling attitude in the party's name.

Elsewhere, however, Respect MP, the Bradford-based George Galloway told his 120,000 followers on Twitter that they should 'tramp the dirt down' on her grave; while other social media users joked that former miners would gladly dig it for free.

Today, there is no deep mining left in Durham. The closure of Wearmouth saw its end in 1993, though the colliery closures had begun long before Thatcher ever took office, with 100 going between 1950 and

1970 and continued after she had left office.

Privatization of the mines was a task for Thatcher's successor, John Major, but for her enemies Thatcher dominates the stage, with Alan Spencer of the National Union of Mineworkers saying that the union was 'not sad to see her go', but they would send condolences to her family.

If Thatcher was not responsible for all of the mining industry's ills, there is little doubt but that she and others in the 1980s Conservative-led governments were architects of the de-industrialisation strategy that has scarred much of Britain since, and which government today wants to reverse.

Three years ago, Swansea University academic, Martin Johnes investigated the impact of the Thatcher era on Wales, where the figures, he argues, hides, rather than illustrates the true picture of the distress caused.

Today, Thatcher, in death, remains the most divisive post-war political leader in Britain: one whose reputation will be thrashed over by historians for decades to come, but GMB leader, Paul Kenny spoke for many on the Left.

Mrs Thatcher 'was a powerful politician' who reigned 'destructive and divisive policies', he said: "Her legacy involves the destruction of communities, the elevation of personal greed over social values and legitimising the exploitation of the weak by the strong."