Syria debate shows a long struggle ahead for Labour’s soul 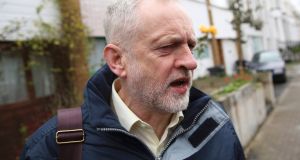 Jeremy Corbyn: Has been slow to react, thus placing himn outside the mainstream of public opinion. Photograph: Neil Hall/Reuters

Labour MPs were always likely to be allowed a free vote on air strikes in Syria in view of their deep divisions on the issue of military intervention. But the circuitous, fractious route they took in arriving at that conclusion has shown both Jeremy Corbyn and his adversaries in the parliamentary party that neither are yet in a position to impose their will on the other.

MPs have been preoccupied for weeks with how to end what many of them see as the nightmare of Corbyn’s leadership, and some saw the Syria vote as an opportunity to undermine him, perhaps fatally.

In the wake of the Paris terrorist attacks, public opinion appeared to be swinging behind David Cameron’s plan to bomb Islamic State (also known as Isis) in Syria, and opposition within the Conservative party was melting fast.

Corbyn’s response to Paris was clumsy, and his public agonising about Britain’s extrajudicial killing of Mohamed Emwazi, known as Jihadi John, and the legitimacy of a police shoot-to-kill policy towards armed terrorists seemed to place him outside the mainstream of public opinion. Shadow chancellor John McDonnell’s embarrassing response to George Osborne’s autumn statement, brandishing Mao’s Little Red Book, seemed to confirm that the leadership was teetering on the brink.

And any MPs who were in any doubt about the potential political price for using Syria to undermine Corbyn were bluntly enlightened by Len McCluskey, general secretary of the Unite union, who warned they were “playing with fire” – the union is the party’s biggest single donor, giving about £19 million during the last parliament – one-third of all revenue in the form of donations.

Labour MPs had sought legal advice about the possibility of staging a new leadership contest but excluding Corbyn from it by ensuring that he failed to get enough nominations from MPs to appear on the ballot. With two out of three Labour party members expressing confidence in Corbyn, there is little chance that the party outside Westminster would accept such a ploy.

“Whatever the rules say, the party would go mad in its current situation if that happened and then there would be a real crisis in most constituencies,” said one of Corbyn’s critics in the parliamentary party.

Labour’s internal debate over Syria has brought into the open the power struggle at the heart of Corbyn’s leadership between the parliamentary party and the party membership. Many of those who voted for Corbyn did so in large measure as a rejection of the party’s MPs, who they believed no longer represented the views or values of the membership.

As McCluskey put it this week: “Jeremy is where he is because, among other reasons, Labour people were sick of politics-as-usual: politics that pander to the reactionary media, that backs wars with no regard to the national interest, and that shows contempt for the views and votes of ordinary people.”

As Corbyn discovered yesterday, however, his support among the party membership is not yet enough to impose his will on the parliamentary party. Both sides in this battle for the Labour Party have shown they are ready to fight, but they could be in for a long, incremental struggle before either prevails.